I am glad to see that Chemistry.com is going to continue it's attack ads that 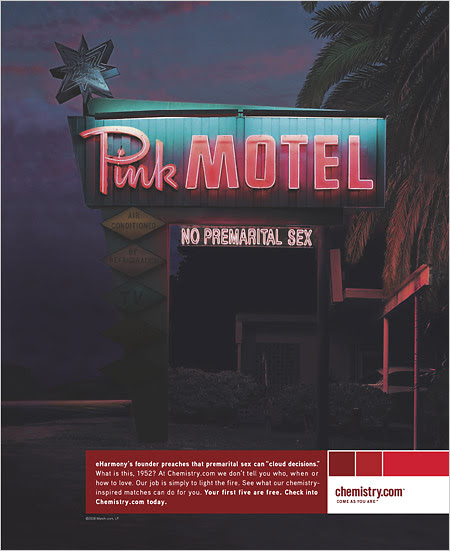 point our eHarmony's anti-gay discrimination and highlighting its ownership by one of Daddy Dobson's buddies. Hopefully, Chemistry will gain market share at eHarmony's expense and demonstrate that discrimination does not sell. Here are some high lights from the New Your Tim's coverage (http://www.nytimes.com/2007/12/24/business/media/24adcol.html?_r=2&oref=slogin&oref=slogin):
The online dating service Chemistry.com plans to unleash a new campaign that seeks to depict its older and larger competitor, eHarmony.com, as out of touch with mainstream American values. The ads, which will appear in weekly newspapers and magazines starting Monday, attack eHarmony for refusing to match people of the same gender and for the evangelical Christian beliefs of its founder, Dr. Neil Clark Warren. Dr. Warren, a former seminary student who has had several books published by Focus on the Family, an evangelical Christian group, has publicly voiced his belief that premarital sex can increase the likelihood of one’s marrying the wrong person.
Chemistry.com is betting that consumers will prefer to associate with a brand that they feel more closely reflects their own values. The campaign imagines a world in which eHarmony’s values — as interpreted by Chemistry.com — were enforced in various ways. For example, one ad shows a sign on a beach that reads “No gays on beach, May-September,” while another features a motel sign declaring, “No premarital sex.” The copy in both ads goes on to assure readers that Chemistry.com does not judge or enforce any moral code on its members.
The ads were developed by Hanft, Raboy & Partners, an independent agency based in New York. “The idea behind the campaign is to globalize eHarmony’s practices, and ask, ‘What would it mean if America had to live by those rules?’” said Adam Hanft, the agency’s founder and chief executive. “What would happen if gays couldn’t go on the beach, or if some paternalistic source says, ‘If you have premarital sex, you can’t get into this hotel’? By amplifying it to that level, it points out the absurdity and discriminatory nature of their practices.”
Posted by Michael-in-Norfolk at Monday, December 24, 2007