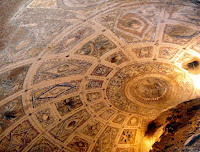 This story will no doubt get the fundies foaming at the mouth, although I suspect that the findings are probably true. If one is a student of history, one realizes that the early Christian church routinely co-opted pagan celebrations and certain traditions to help ease the acceptance of the new faith by various pagan groups. The story of the Resurrection in fact has many parallels with the cult of the Egyptian goddess, Isis. The true account of who Christian festivals and observances came to be held on specific dates makes a farce out of the Christianist belief that modern day Christian traditions have always prevailed. A photo of the ceiling of the Lupercale which was discovered earlier this year is at left. Here are some story highlights (http://www.washingtonpost.com/wp-dyn/content/article/2007/12/22/AR2007122200859.html?hpid=sec-religion):

ROME -- The church where the tradition of celebrating Christmas on Dec. 25 may have begun was built near a pagan shrine as part of an effort to spread Christianity, a leading Italian scholar says. Italian archaeologists last month unveiled an underground grotto that they believe ancient Romans revered as the place where a wolf nursed Rome's legendary founder Romulus and his twin brother Remus.
A few feet from the grotto, or "Lupercale," the Emperor Constantine built the Basilica of St. Anastasia, where some believe Christmas was first celebrated on Dec. 25. Constantine ended the frequent waves of anti-Christian persecutions in the Roman empire by making Christianity a lawful religion in 313. He played a key role in unifying the beliefs and practices of the early followers of Jesus.

In 325, he convened the Council of Nicaea, which fixed the dates of important Christian festivals. It opted to mark Christmas, then celebrated at varying dates, on Dec. 25 to coincide with the Roman festival celebrating the birth of the sun god, Andrea Carandini, a professor of archaeology at Rome's La Sapienza University, told reporters Friday.
The Basilica of St. Anastasia was built as soon as a year after the Nicaean Council. It probably was where Christmas was first marked on Dec. 25, part of broader efforts to link pagan practices to Christian celebrations in the early days of the new religion, Carandini said. "The church was built to Christianize these pagan places of worship," he said. "It was normal to put a church near these places to try to 'save' them."

Bottini and Carandini both said future digs could bolster the link between the shrine and the church if structures belonging to the "Lupercale" are found directly below the basilica. The Basilica St. Anastasia was the first church to rise not on the ancient city's outskirts, but on the Palatine Hill, the palatial center of power and religion in imperial Rome, Carandini said. Though little known today, at the time of Constantine it was one of the most important basilicas for Christians in Rome, he said.
The "Lupercale" shrine _ named after the "lupa," Latin for she-wolf _ is 52 feet below ground. So far, archaeologists have only been able to see it by inserting probes and cameras that have revealed a vaulted ceiling decorated with colored marble and a white imperial eagle. Though some experts have expressed doubts that the grotto is in fact the mythological nursery of Romulus and Remus, most archaeologists believe the shrine fits the descriptions found in ancient texts, and plans are being drawn up to excavate the structure further.
Besides the possible connection to the sun god, the Lupercale had another important place in Roman religion: Since the earliest times of Rome the cave was the centre of a very popular fertility cult. Each year Romans celebrated the lupercalia with great fervour. The lupercalia included some sacrifices inside the cave where the blood of the sacrificial animals were smeared in the faces of youngsters of noble families, but much more popular with the common people were the part of the festivitas outside the cave. To the applause of the onlooking crowds, the priests, luperci, dressed only in a goatskin throng, would chase young women around the entire Palatine Hill, whipping them all the way, in an attempt to induce fertility into them.
The lupercalia were so popular that not even the imperial edicts of the fourth century AD which outlawed all non-christian religion, could get the Romans to stop partying. The lupercalia continued well into the sixth century AD, to the dismay of the early popes.
Posted by Michael-in-Norfolk at Sunday, December 23, 2007