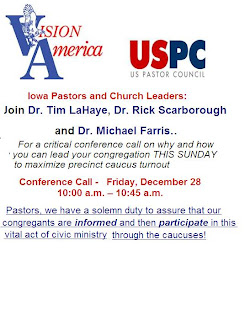 Meanwhile, we have Mike "Let Lock Up Gays" Huckabee using the same tactics used by the late Jerry Falwell and Pat Robertson in Virginia to get out the Christianist vote - i.e., Have the churches act as virtual arms of the GOP (http://marcambinder.theatlantic.com/archives/2007/12/pastors_urged_to_caucus_by_huc.php). I have seen it time and time again and often wonder how/why the IRS does not step in. The pastors do everything short of giving an endorsement speech for the pulpit and including candidate campaign materials in the church bulletins. As for Mike Farris, he is from Virginia and a certifiable religious lunatic. Here are a couple relevant highlights:

Here's an explicit example of how Mike Huckabee is relying on an outsourced Get-Out-The-Caucusers effort and on the implied support of pastors -- under the radar. Pastor Rick Scarborough is hosting a conference call with Iowa pastors to discuss the caucus... joining him are Dr. Tim "Left Behind" LaHaye and Dr. Michael "Home School" Farris.
All three are committed supporters of Mike Huckabee. An e-mail sent to Iowa pastors advertising the call doesn't mention Huckabee -- that wouldn't be legal -- but does say that pastors "have a duty" to keep their congregants "informed" and to lead them to "participate" in the caucuses. Farris has been a senior unpaid adviser to Huckabee from day one and was key in helping to organize the families of home schoolers to attend the Republican straw poll in Ames last summer.

This is all, again, legal, provided the pastors stay within certain guidelines. But it's very easy to see that a mobilization of pastors and their congregants helps a single candidate. And given how successfully evangelicals have knocked and dragged their voters in the past, their might -- even uncoordinated -- could overwhelm the most established of Iowa organizations on caucus night.
Posted by Michael-in-Norfolk at Friday, December 28, 2007