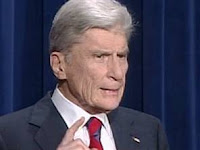 Daddy Dobson must be close to having an aneurysm - well, we can hope can't we? - over the Senate's vote on the Matthew Shepard Hate Crimes Act. I was extremely please to see that Virginia's Senator John Warner was among the Republicans who voted for passage of the Act. No doubt, the Christo-fascists will be blowing up the Warner's phone lines. Once again, Warner has shown that his retirement will be a loss for Virginia and the country. Hopefully, Mark Warner [no relation] will win John Warner's seat in 2008. Here are some highlights from the Washington Post (http://www.washingtonpost.com/wp-dyn/content/article/2007/09/27/AR2007092700126.html?hpid=moreheadlines):
The Senate today approved an expansion of federal hate-crimes law to include protections for gay men and lesbians, defying a presidential veto threat by attaching the measure to a high-priority defense bill. Republicans said they will try to remove the provision in final negotiations with the House, but if that effort fails, GOP leaders urged President Bush to follow through with his long-standing veto threat. They were furious this week when Majority Leader Harry M. Reid (D-Nev.) announced that he would force a vote on an expanded hate-crimes statute, with Sen. John Cornyn (R-Tex.) calling Reid's maneuver a "shameful" attempt to "hijack" essential defense legislation.
Democrats argued that the amendment addresses terrorism of a different form. "The defense authorization is about dealing with the challenges of terrorism overseas," said Sen. Edward M. Kennedy (D-Mass.). "This is about terrorism in our neighborhood."

The amendment is called the Matthew Shepard Act, named for a young gay man who was beaten and left to die on a fence near Laramie, Wyo., in 1998. The proposal has passed the House or Senate several times over the years but has never cleared the entire Congress.

Under the Senate amendment, the definition of a hate crime would expand to include gender, sexual orientation, gender identity and disability. Local law enforcement officials would be allowed to apply for federal grants to solve such crimes, and federal agents would be given broader authority to assist state and local police. More stringent federal sentencing guidelines would also be instituted.
Republicans counter that the expansion represents an unnecessary intrusion by the federal government. "We believe that local -- state and local law enforcement agencies are effectively using their laws to the full extent that they can," said White House spokeswoman Dana Perino.

Of course, the White House thinks we are succeeding in Iraq too, so that demonstrates how much the Chimperator's opinion is worth.
Posted by Michael-in-Norfolk at Thursday, September 27, 2007