Archbishop: Gays have place in church 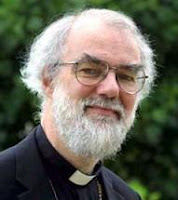 The battle between those who follow Christ's message of love and those who would make the Gospels a message of hate continues. First, Archbishop Rowan Williams makes statements confirming that gays have a place in the Anglican Communion (http://www.telegraph.co.uk/news/main.jhtml?xml=/news/2007/09/23/ngay123.xml):

Dr Williams's support for gays will fuel anger among conservative Church members who will see his message of support as direct challenge to their deeply held view that homosexuality is a sin. In his address to a key -gathering of 159 American bishops in New Orleans, the Archbishop insisted: "I do not assume that homosexual inclination is a disease." Warning that "violence against gay and lesbian people is inexcusable," he added: "Gay and lesbian people have a place in the Church as do all the baptised." Dr Williams flew to America in a last-minute round of shuttle diplomacy to reconcile the warring camps.
But his message of support for homosexual rights will be seen by religious conservatives as confirmation that he has taken sides against them and that they are viewed as the rebels in the Anglican Church. American bishops seem certain this week to endorse a greater role for homosexuals in the Church, in a move that could cause the biggest worldwide split in the Anglican congregation, headed by the departure of conservative African and Asian bishops.
Evangelical Christians around the world believe that homosexuality is a sin that can be cured, a view emphatically rejected by Dr Williams. He condemned homophobia and said that the roles gays could take within the Church were being considered. Dr Williams also said that the American Church faces "no ultimatum" to end its stance on gays, which includes the ordination of the openly homosexual Bishop of New Hampshire three years ago. His words will force the African church leaders to decide whether to leave the Anglican Church or accept that the American Church cannot be forced to stop appointing gay bishops.
In contrast to Williams, fundamentalist hate merchant Archbishop Peter Akinola from Nigeria delivered the sermon Sunday at a Wheaton, Illinios congregation consisting of several area churches that have separated from the U.S. Episcopal Church because of its acceptance of homosexuality (http://www.chicagotribune.com/news/local/chicago/chi-akinola24sep24,1,4809684.story):
In an impassioned Sunday morning sermon to more than 2,000 worshipers at a Wheaton church, a leading critic of the Episcopal Church's liberal stance on homosexuality spoke against sexual sin, saying unity must come from transformation and obedience to God. His controversial visit to Edman Memorial Chapel coincides with a meeting in New Orleans of Episcopal bishops who must respond to a demand from Anglican leaders that they stop consecrating gay bishops and ban the blessing of same-sex unions.
"Fornication is fornication. Adultery is adultery. ... These are the areas of primary evangelism," Akinola said. The archbishop also supports a bill in Nigeria that would make homosexual sex and any public expression of homosexual identity a crime punishable by imprisonment."He refers to his views on gays as Scripture. Well, I refer to them as outright bigotry," said Jim Beyer, a member of Emmanuel Episcopal Church in La Grange.Andy Thayer, co-founder of the Chicago-based Gay Liberation Network, said: "Akinola preaches hate and division. He's trying to split the worldwide Anglican Communion and he's making scapegoats of gays in the U.S. and especially in Nigeria."
Posted by Michael-in-Norfolk at Monday, September 24, 2007