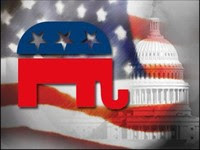 This (http://blogs.abcnews.com/theblotter/2007/09/house-republica.html)does not look like very good news for the GOP. Admittedly, at the natioal committee, the GOP still has an advantage, but the Democrat advantage at the House and Senate level more than bridges this gap. I hope the gap against the GOP continues to widen. In my view, only a massacre in November, 2008, will end the far right lunacy that has become the hallmark of the GOP:

A crucial GOP fundraising committee is nearly broke, according to its latest monthly filing with the Federal Election Committee last week. The National Republican Congressional Committee (NRCC) reported $1.6 million in cash on hand and $4 million in debts as of Aug. 31. The group helps bankroll House campaigns for GOP candidates. Its counterpart, the Democratic Congressional Campaign Committee, reported $22.1 million, more than 10 times its Republican counterpart.
Senate Republicans are in a state of relative poverty, also. The National Republican Senatorial Campaign has just over $7 million on hand, according to the new filings. The Democratic Senatorial Campaign Committee has more than $20 million.
Posted by Michael-in-Norfolk at Wednesday, September 26, 2007