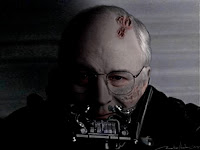 While this measure may well not pass, it would nonetheless be nice to see sharp focus placed on the misdeeds of Vice President "Darth Vader" Cheney. Particularly before he convinces Chimperator Bush that he should order an attack on Iran. Here are portions of a RawStory article (http://rawstory.com//news/2007/Kucinich_seriously_thinking_about_forcing_vote_0928.html):

Rep. Dennis Kucinich says he is so concerned about what he sees as the Bush administration's push for a war with Iran that he is considering using a parliamentary measure to force the House of Representatives to vote on impeaching Vice President Dick Cheney.
"We're preparing for another war, and they're going to destroy America," the Ohio Democrat said Thursday on the Ed Schultz show. "We have a government in place right now that has to be challenged. I'm seriously thinking about calling a privileged resolution on impeachment of the vice president and forcing a vote on the floor of the House."
privileged resolution would force the full House to debate about whether to proceed with impeachment, but it remains unclear precisely how, when or whether Kucinich would be able to introduce such a resolution. Privileged measures "may be called up on the floor whenever another measure is not already pending" and the House agrees to consider it, according to the Congressional Research Service.
Posted by Michael-in-Norfolk at Saturday, September 29, 2007