Welcome to My Truth 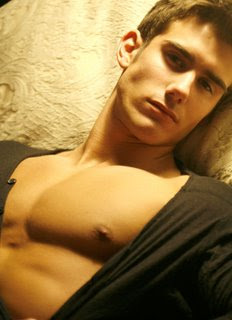 Via Real Euphoria, I discovered a new Blog, Welcome to My Truth (http://onmytruth.wordpress.com/), that has wonderful wit and attitude. One post particularly struck home – namely on how superficial and focused on looks many gay guys can be. Coming out much later in life, at times I felt that I was already a “has been” before I ever got started in my new gay life. In this area where so many LGBT people exist under the radar (particularly the large number of gays in the military stationed in Norfolk), often the only venue for meeting people is either on line or in clubs, where all the emphasis is on youth and beauty.

I will admit to enjoying looking at a beautiful guy (see photo at left) as much as any gay male, but for anyone to be b/f material they need to have intelligence and a good heart. The b/f has both and deep down in me, that’s what is the most attractive about him. Looks will fade and bodies will age, but these aspects will continue on forever. Each of us has our own story, and many of us older guys have experienced and learned truths that the younger generation of gays will never know because of the advancement in the acceptance of LGBT people in general. I hope all of us can be a little kinder to one another and less judgmental based soley on appearance. There are plenty of folks who hate us - even though they don’t even know us - without us inflicting pain on one another.
Posted by Michael-in-Norfolk at Sunday, May 13, 2007