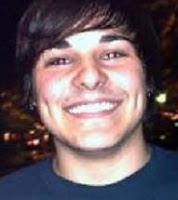 PageOneQ and Towleroad are reporting an arrest in the recent South Carolina murder of a gay 20 year old(http://pageoneq.com/):
Kennedy (pictured at left) had left Brew's Bar when a man jumped out of a car and punched him, knocking him to the ground. Kennedy died nearly 17 hours later of injuries sustained during the assault.
The arrest warrant for Moller said "investigators believe the assault was due to the victim's sexual orientation" according to GreenvilleOnline.
The paper reports: "Master Deputy Michael Hildebrand said the case has been turned over to the FBI who will determine whether or not to proceed with a hate crime investigation. South Carolina doesn't have a statute that covers hate crimes, so a federal agency would have to make the charges, according to the Sheriff's Office. Hildebrand said that witnesses and 'other investigative means' led investigators to Moller. Through the investigation, deputies believe that Moller made a comment about Kennedy's sexual orientation either before or during the assault, according to Hildebrand and the warrant."
While the hate merchants of the "Christian" Right claim that gays don't need "special rights," when is the last time there was a mured of a Christian in the USA based on the religion of the victim? These Christianists disgust me.
Posted by Michael-in-Norfolk at Friday, May 18, 2007