Surfing Can Be Scary 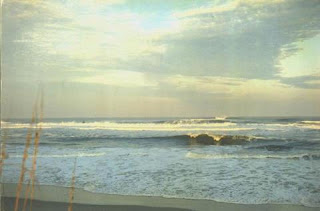 This weekend was another one of no decent waves and/or crappy weather. I seriously need to get back into surfing regularly, both for (1) the therapy aspect - when you are our in the line up, especially in larger waves, all focus is on the ocean and waves (and ocassional eye candy) - and (2) the good exercise aspect. The photo above - which I call "Huge Hatteras" - is deceiving unless you realize that the shore break was about 8 feet where it was hitting the beach.
The photo is from a surf trip to the North Carolina Outerbanks (Pea Island area) about five summers back that some of us from Christian Surfers (the story of my membership to be discussed in a future post) took when a hurricane was about 300 miles offshore and generating huge surf of at least 15+ feet. My son and two of his friends were along with me. I seriously thought I was going to drown that day when I was slammed by a rougue wave out at the farthest break zone and taken almost all the way down to the bottom.
I decided after that episode that I'd leave the really big waves to others.
Posted by Michael-in-Norfolk at Monday, May 14, 2007

Riding the Wave is the Anthem of My Life -- cresting on that "phase transition" between chaos and order, above the undertows, immersed in the waters of life. Scary? Never. Exuberant. Thrilling. The Wave always brings me back to the sands of time, only to paddle-back to the immensity just left behind. We can either Ride the Wave or it can take us under. We can stay out of the water, but why, when the Wave is Life. All we have to do is navigate our balance as the wave proceeds, then ride.

Thanks for the comment. I have no intention of getting out of the water - just recognizing when a perhaps unmanagable strom is at hand and using discretion to avoid getting pulled under.

Perhaps I need to revise my comments. Being "pulled under" is part of the Wave. It's when we're vulnerable to the FORCES we might control, but would not dare to try. But, do watch for those undertows. They can suffocate, toss, tumble, and dash one in the inexplicable forces of destruction. It's a risk to Riding the Wave on that "phase transition." But so is stagnance. It's what Stuart Kaufmann calls "being home in the universe." Who says science cannot be romantic?