Death of a Theocrat 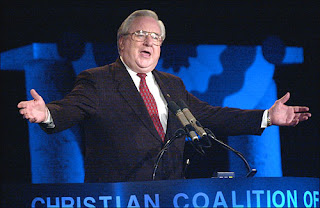 I returned from a meeting this afternoon to learn that Jerry Falwell had died around noon time today. While I generally do not wish anyone ill, much less death, I’d be lying if I said I thought the disappearance of Mr. Falwell from Virginia’s political scene is a loss for the state. In fact, I hope that Mr. Falwell’s passing may help to begin the restoration of Virginia to its one time age of enlightened. As a Virginia resident, I have always considered Mr. Falwell and Pat Robertson (and Mike Farris and Charles Colson) to be among the State of Virginia’s larger embarrassments.
It has, in fact, baffled me at times how a state that produced the brilliance of Washington, Jefferson, Madison, Mason, and Monroe, among others, could come to have more notoriety for its wingnut theocrats who want nothing more than to destroy the freedom of religion the illustrious founding fathers from Virginia designed. Mr. Falwell certainly did his part to tarnish Virginia’s reputation. He certainly was no friend to gay Americans. A sampling of statements from the Virginian Pilot’s article on Falwell is as follows:
“One of the largest outcries came in 2001 after Falwell, on a broadcast of “The 700 Club,” said that the Sept. 11 terrorist attacks were prompted by God’s wrath toward pagans, abortionists, feminists, homosexuals and the American Civil Liberties Union. “All of them who have tried to secularize America, I point the finger in their face and say, 'You helped this happen,’” he said, during an interview with Virginia Beach religious broadcaster Pat Robertson, who hosts “The 700 Club” for his Christian Broadcasting Network.
This so-called “religious right” coalesced behind the Republican Party because the Democratic Party “began to embrace all the radical extremist groups in the country – the feminists, the homosexuals, abortionists, the left-wingers, you name it,” Falwell said in 1996.”
Hopefully, God will not judge Mr. Falwell as harshly and as un-lovingly as he judged others. Imagine Falwell’s shock at the gates of Heaven if Jesus turns out to have been gay. Here's the Task force comment on Falwell's passing:
Statement by Matt Foreman, Executive DirectorNational Gay and Lesbian Task Force:
“The death of a family member or friend is always a sad occasion and we express our condolences to all those who were close to the Rev. Jerry Falwell. Unfortunately, we will always remember him as a founder and leader of America’s anti-gay industry, someone who exacerbated the nation’s appalling response to the onslaught of the AIDS epidemic, someone who demonized and vilified us for political gain and someone who used religion to divide rather than unite our nation.”
Posted by Michael-in-Norfolk at Tuesday, May 15, 2007