The Real Racist Origins of the Religious Right 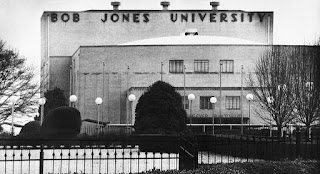 With the leaking of Justice Alito's draft ruling overturning Roe v. Wade it may be easy for some to stick their heads in the sand and pretend that other rulings of the Supreme Court based on the right to privacy - the use of contraception, ending sodomy laws, interracial marriage, and same sex marriage are not at risk.  Such wilful blindness would be the height of foolishness especially for non-white Americans if one knows the true origins of the so-called "Religious Right" which is neither truly Christian nor right about a host of issues.  The real origins of this toxic demographic was a reaction to de-segregation and and government and court rulings that stripped racist institutions of their tax exempt status. Sratch the back of a member of today's religious right and you will likely also find a white supremacist - which is why this movement so strongly embraced the openly racist Donald Trump.  Trump's promise to give them political power was merely icing on the cake.  Now, with a majority of the Supreme Court comprised of devotees of the religious right agenda, much more than Roe v. Wade is on the target list notwithstanding Alito's - in my view - deliberate lie that such is not the case.   A piece in Politico Magazine from 2014 merits a revisit since it looks at the true origins of this cruel, militant and hate driven movement.  Here are article highlights:

One of the most durable myths in recent history is that the religious right, the coalition of conservative evangelicals and fundamentalists, emerged as a political movement in response to the U.S. Supreme Court’s 1973 Roe v. Wade ruling legalizing abortion. The tale goes something like this: Evangelicals, who had been politically quiescent for decades, were so morally outraged by Roe that they resolved to organize in order to overturn it.

This myth of origins is oft repeated by the movement’s leaders. In his 2005 book, Jerry Falwell, the firebrand fundamentalist preacher, recounts his distress upon reading about the ruling in the Jan. 23, 1973, edition of the Lynchburg News: “I sat there staring at the Roe v. Wade story,” Falwell writes, “growing more and more fearful of the consequences of the Supreme Court’s act and wondering why so few voices had been raised against it.” Evangelicals, he decided, needed to organize. Some of these anti- Roe crusaders even went so far as to call themselves “new abolitionists,” . . . .

But the abortion myth quickly collapses under historical scrutiny. In fact, it wasn’t until 1979—a full six years after Roe—that evangelical leaders, at the behest of conservative activist Paul Weyrich, seized on abortion not for moral reasons, but as a rallying-cry to deny President Jimmy Carter a second term. Why? Because the anti-abortion crusade was more palatable than the religious right’s real motive: protecting segregated schools. So much for the new abolitionism.

Today, evangelicals make up the backbone of the pro-life movement, but it hasn’t always been so. Both before and for several years after Roe, evangelicals were overwhelmingly indifferent to the subject, which they considered a “Catholic issue.” In 1968, for instance, a symposium sponsored by the Christian Medical Society and Christianity Today, the flagship magazine of evangelicalism, refused to characterize abortion as sinful, citing “individual health, family welfare, and social responsibility” as justifications for ending a pregnancy.

Although a few evangelical voices, including Christianity Today magazine, mildly criticized the ruling, the overwhelming response was silence, even approval. Baptists, in particular, applauded the decision as an appropriate articulation of the division between church and state, between personal morality and state regulation of individual behavior. “Religious liberty, human equality and justice are advanced by the Supreme Court abortion decision,” wrote W. Barry Garrett of Baptist Press.

So what then were the real origins of the religious right? It turns out that the movement can trace its political roots back to a court ruling, but not Roe v. Wade.

In May 1969, a group of African-American parents in Holmes County, Mississippi, sued the Treasury Department to prevent three new whites-only K-12 private academies from securing full tax-exempt status, arguing that their discriminatory policies prevented them from being considered “charitable” institutions. The schools had been founded in the mid-1960s in response to the desegregation of public schools set in motion by the Brown v. Board of Education decision of 1954. In 1969, the first year of desegregation, the number of white students enrolled in public schools in Holmes County dropped from 771 to 28; the following year, that number fell to zero.

In Green v. Kennedy (David Kennedy was secretary of the treasury at the time), decided in January 1970, the plaintiffs won a preliminary injunction, which denied the “segregation academies” tax-exempt status until further review. In the meantime, the government was solidifying its position on such schools. Later that year, President Richard Nixon ordered the Internal Revenue Service to enact a new policy denying tax exemptions to all segregated schools in the United States. . . . donations to such organizations would no longer qualify as tax-deductible contributions.

On June 30, 1971, the United States District Court for the District of Columbia issued its ruling in the case, now  Green v. Connally (John Connally had replaced David Kennedy as secretary of the Treasury). The decision upheld the new IRS policy . . . .

In the decades following World War II, evangelicals, especially white evangelicals in the North, had drifted toward the Republican Party—inclined in that direction by general Cold War anxieties, vestigial suspicions of Catholicism and well-known evangelist Billy Graham’s very public friendship with Dwight Eisenhower and Richard Nixon. Despite these predilections, though, evangelicals had largely stayed out of the political arena, at least in any organized way. If he could change that, Weyrich reasoned, their large numbers would constitute a formidable voting bloc—one that he could easily marshal behind conservative causes.

“The new political philosophy must be defined by us [conservatives] in moral terms, packaged in non-religious language, and propagated throughout the country by our new coalition,” Weyrich wrote in the mid-1970s. “When political power is achieved, the moral majority will have the opportunity to re-create this great nation.” Weyrich believed that the political possibilities of such a coalition were unlimited.

But this hypothetical “moral majority” needed a catalyst—a standard around which to rally. For nearly two decades, Weyrich, by his own account, had been trying out different issues, hoping one might pique evangelical interest: pornography, prayer in schools, the proposed Equal Rights Amendment to the Constitution, even abortion.

The Green v. Connally ruling provided a necessary first step: It captured the attention of evangelical leaders, especially as the IRS began sending questionnaires to church-related “segregation academies,” including Falwell’s own Lynchburg Christian School, inquiring about their racial policies. Falwell was furious. “In some states,” he famously complained, “It’s easier to open a massage parlor than a Christian school.”

One such school, Bob Jones University—a fundamentalist college in Greenville, South Carolina—was especially obdurate. The IRS had sent its first letter to Bob Jones University in November 1970 to ascertain whether or not it discriminated on the basis of race. The school responded defiantly: It did not admit African Americans.

Although Bob Jones Jr., the school’s founder, argued that racial segregation was mandated by the Bible, Falwell and Weyrich quickly sought to shift the grounds of the debate, framing their opposition in terms of religious freedom rather than in defense of racial segregation.

Bob Jones University did, in fact, try to placate the IRS—in its own way. . . . the school admitted blacks to the student body, but, out of fears of miscegenation, refused to admit  unmarried African-Americans. The school also stipulated that any students who engaged in interracial dating, or who were even associated with organizations that advocated interracial dating, would be expelled.

The IRS was not placated. On January 19, 1976, after years of warnings—integrate or pay taxes—the agency rescinded the school’s tax exemption.

For many evangelical leaders, who had been following the issue since  Green v. Connally, Bob Jones University was the final straw.

Weyrich saw that he had the beginnings of a conservative political movement, which is why, several years into President Jimmy Carter’s term, he and other leaders of the nascent religious right blamed the Democratic president for the IRS actions against segregated schools—even though the policy was mandated by Nixon, and Bob Jones University had lost its tax exemption a year and a day before Carter was inaugurated as president.

But Falwell and Weyrich, having tapped into the ire of evangelical leaders, were also savvy enough to recognize that organizing grassroots evangelicals to defend racial discrimination would be a challenge. It had worked to rally the leaders, but they needed a different issue if they wanted to mobilize evangelical voters on a large scale.

By the late 1970s, many Americans—not just Roman Catholics—were beginning to feel uneasy about the spike in legal abortions following the 1973  Roe decision. The 1978 Senate races demonstrated to Weyrich and others that abortion might motivate conservatives where it hadn’t in the past.

In the course of my research into Falwell’s archives at Liberty University and Weyrich’s papers at the University of Wyoming, it became very clear that the 1978 election represented a formative step toward galvanizing everyday evangelical voters. Correspondence between Weyrich and evangelical leaders fairly crackles with excitement.

Weyrich, Falwell and leaders of the emerging religious right enlisted an unlikely ally in their quest to advance abortion as a political issue: Francis A. Schaeffer—a goateed, knickers-wearing theologian who was warning about the eclipse of Christian values and the advance of something he called “secular humanism.” . . . . Schaeffer and Koop argued that any society that countenanced abortion was captive to “secular humanism” and therefore caught in a vortex of moral decay.

Between Weyrich’s machinations and Schaeffer’s jeremiad, evangelicals were slowly coming around on the abortion issue.

Carter lost the 1980 election for a variety of reasons, not merely the opposition of the religious right. . . . Falwell, never shy to claim credit, was fond of quoting a Harris poll that suggested Carter would have won the popular vote by a margin of 1 percent had it not been for the machinations of the religious right. “I knew that we would have some impact on the national elections,” Falwell said, “but I had no idea that it would be this great.”

[E]vangelicals, having helped propel Carter to the White House four years earlier, turned dramatically against him, their fellow evangelical, during the course of his presidency. And the catalyst for their political activism was not, as often claimed, opposition to abortion. Although abortion had emerged as a rallying cry by 1980, the real roots of the religious right lie not the defense of a fetus but in the defense of racial segregation.

It is critical to know what motivates one's political and social opponents and to not allow them to cloak their true agenda.