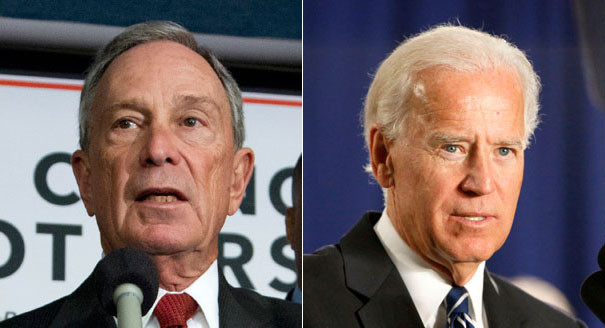 As numerous posts have indicated, I have never seen Joe Biden as the Democrats' best bet for defeating Donald Trump in November.  Indeed, as noted, he reminds me of Bob Dole who lost badly in his presidential contest.  Both men have remarkable resumes and credentials, yet lack that ability to inspire enthusiasm and excitement - something that will be needed to save America from the nightmare of a Trump second term. Bernie Sanders inspires excitement in his cult-like followers but seems to have little ability to push beyond his 25% level of support and inspires dread in the other 75% of Democrats who see his nomination as a guarantee that Trump will be reelected.  The seeming beneficiary of this state of play is Michael Bloomberg as noted in a column in the New York Times here and a piece in Politico that looks at Biden's sinking prospects and the beginning of the flight of black supporters from Biden's sinking ship.  Here are highlights from Politico:

Moderate Democrats on Capitol Hill have begun to confront a future without Joe Biden — and are scrambling to find a centrist alternative who can topple both Bernie Sanders and Donald Trump.

And a growing number of Capitol Hill Democrats say they’re turning to billionaire Mike Bloomberg, a former New York mayor who became a trusted ally after his personal fortune helped Democrats recapture the House in 2018.

Publicly, moderate Democrats insist there’s plenty of time until Super Tuesday, when Biden or Bloomberg could emerge as the frontrunner. But anxiety is rising on both sides of the Capitol that a Sanders ticket could cost the party not just the race for the White House but also of control of Congress — while exposing raw ideological tensions within the party ahead of November.

The soul-searching within the establishment wing of the Democratic Party comes after Sanders solidified his frontrunner status in Iowa and New Hampshire, which produced a pair of cringeworthy finishes for Biden. The former vice president did so poorly in New Hampshire that he ditched his own election night watch party to head to South Carolina, possibly giving an opening to Bloomberg, who skipped the first four contests.

“I’m feeling a momentum shift to Bloomberg right now,” said Rep. Lou Correa (D-Calif.), who endorsed Biden in the summer and plans to stick with him.

One of the most glaring examples of the change in tide on Capitol Hill is a trio of Bloomberg endorsements from the Congressional Black Caucus on Wednesday — a not-so-subtle show of force against Biden, who remains the favored candidate among black voters nationally.

Rep. Gregory Meeks (D-N.Y.), a senior member of the CBC who endorsed Bloomberg on Wednesday, declined to say whether he thinks Sanders could beat Trump and added he would fully support the eventual nominee. But Meeks — who fought Bloomberg over his stop-and-frisk policies as mayor — said the trajectory of the race is what persuaded him to weigh in now.

“There’s a number of [candidates] who are ideologically where I am. But I also had to add to that electability,” Meeks said. “And that’s a tremendous consideration we’ll have to make because you can have the best ideology but if you’re not electable, then where are we? We’ve got to win.”

When asked whether Biden’s faltering was a factor, Meeks didn’t deny it: “To say that it was zero factor would not be the truth,” he said. “It was one of many factors because you’ve got to be able to pull it together, you’ve got to make sure that one has the ability to win.”

Several other CBC members said privately that they expected other black lawmakers who previously supported Biden to soon come out for Bloomberg.

But there are some concerns that Bloomberg, who has poured hundreds of millions of dollars into the race so far, remains untested heading into Super Tuesday on March 3: He hasn’t gone head-to-head at a single debate this cycle, though he is expected to qualify for Nevada next week.

Some Democrats also fear a potential drip-drip of controversies, like a 2015 audio tape that surfaced this week on which Bloomberg defends his stop-and-frisk policies in language that have prompted accusations of racism.

For many Democrats, there is a real fear about Biden’s staying power, especially if Senate Republicans make good on their threat to investigate Hunter Biden’s role at a Ukrainian gas company now that Trump’s impeachment trial is over.

Two self-described moderate Democrats did finish strong in Iowa and New Hampshire, led by former South Bend, Ind., Mayor Pete Buttigieg. But Democrats said privately they’re desperate for a candidate with the cash and name recognition to beat Trump — something they don’t know if Buttigieg or Minnesota Sen. Amy Klobuchar, who finished a strong third in New Hampshire, can deliver — without exposing them to ceaseless GOP attacks on socialism.

"There's a lot of people right now on the fence," said Rep. Dean Phillips (D-Minn.), a prominent supporter of Klobuchar. Asked about Klobuchar's surge, Phillips said: "She is being elevated in more and more conversations every day. That said, so is Michael Bloomberg."

The most intense fears are among the 30 Democrats sitting in districts that Trump won in 2016, who fear they can’t compete in 2020 if Sanders becomes the nominee and spurs months of “Medicare for All” attacks from GOP groups in their districts.

Some of the most endangered incumbents, like Rep. Anthony Brindisi of New York, have acknowledged they wouldn’t be able to support Sanders if he does become the nominee, hoping at best that voters split their ticket with Trump in November.

[S]ome Senate Democrats have expressed concern about the effect Sanders could have on Democratic challengers in swing-state races. While Sen. Catherine Cortez Masto (D-Nev.), chairwoman of the Democratic Senatorial Campaign Committee, said Wednesday Democrats would coalesce around whoever the nominee is, others are not so sure.

“Sen. Sanders’ argument is that his candidacy will inspire and mobilize a whole new sector of our country that doesn’t typically vote,” added Sen. Chris Coons (D-Del.), a Biden backer.

But Coons argued that he has yet to see evidence of that based on voter turnout in Iowa, which was lower than expected. New Hampshire turnout, however, did set a new record on Tuesday. “He may make it harder rather than easier for us to take back the Senate,” Coons said.

“If Biden announced today that he was going to drop out, you’d have an avalanche of African Americans around the country going to Bloomberg,” said Rep. Emanuel Cleaver (D-Mo.), who endorsed Biden last September and plans to stick with him.

“It would be foolish for anyone to say what happened in Iowa and New Hampshire is not going to have an impact, it will,” Cleaver said of Biden’s performance in the past 10 days. “There’s no question Nevada is extremely important.”

Posted by Michael-in-Norfolk at Thursday, February 13, 2020