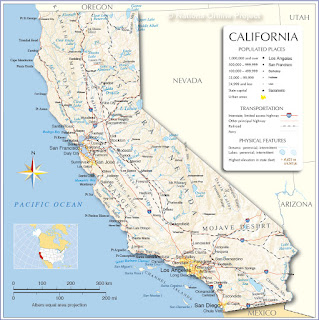 Virginia has moved into the blue state category due to two principal factors: (i) it has an increasingly college educated population, and (ii) it has seen a large influx of residents from liberal states.  These phenomenon are especially evident in Northern Virginia and the rest of Virginia's urban crescent that stretches south through Richmond and then south east to Hampton Roads. As a piece in the New York Times notes, similar things are happening in other states that are trending blue, often driven by exiles from California who take their more liberal views and support for the environment with them to their new home states. Donald Trump constantly trashes California and its progressive policies, yet that states' former residents are transforming the political landscape in Nevada. Colorado and Arizona - and, in time, perhaps even Texas.  Here are column highlights:

President Trump clearly hates the most populous state in the country he governs. While trashing California with his gutter mouth, the president has used his office to physically trash the home to nearly one in eight Americans — seeking to make its air more polluted, its water less clean, its forests more vulnerable to catastrophic fires.

But now the Golden State is poised to strike back. By moving its presidential primary from June to March 3, California will finally exert a political influence commensurate to its size. Almost 500 delegates, a fourth of the number needed to win the Democratic nomination, are at stake.

Perhaps more consequential — or at least overlooked — is what’s happening among the vast diaspora of more than 7.3 million people who have left California since 2007. They appear to be changing the political makeup of the states they’ve moved to, perhaps enough to alter the Electoral College map in favor of Democrats.

With nearly 40 million people, California is still gaining population — barely. But stratospheric home prices and unbearable rental costs have created a reverse “Grapes of Wrath,” forcing those who are not rich to flee to states with much lower costs of living.

The question is: Are they bringing California values — fierce defense of the environment, tolerance of immigrants and a multiracial society, insistence on universal health care — with them? It could be just demographic churn. But if you look at the changing politics of Nevada, Colorado and Arizona, all fast-growing states packed with new arrivals from California, the answer is yes. Texas may not be far behind.

In Nevada, to which 500,000 Californians moved between 2008 and 2018, Democrats won the governor’s mansion and a second U.S. Senate seat in 2018. There used to be more Republicans, by registration. But Democrats now have a 70,000-voter advantage, and they prevailed there in the last three presidential races.

Colorado, another favorite landing spot for those who can no longer afford California, is now reliably blue. Democrats won majorities there by more than 100,000 votes in the last two presidential elections. The state is likely to flip a Senate seat, bouncing the inept Republican Cory Gardner for a popular former governor, John Hickenlooper.

Arizona could be the next to fall to Democrats. The state known for retirees and tax-averse whites is becoming more diverse and younger and is full of ex-Californians. Between 2001 and 2014, Arizona added about a quarter-million people from its neighboring state to the west.

[I]f the Dems were to win Arizona’s 11 Electoral College votes, as polls show they could, and lose Wisconsin’s 10, while getting back Pennsylvania and Michigan, that would be enough to remove the vile and corrupt man occupying the White House.

Texas, the top state for California exiles, will probably come up short for Democrats this year, though it’s in play. Democrats have a growing advantage in Dallas, Houston, Austin and San Antonio, all seeing heavy U-Haul traffic from California.

Polls in Texas show Trump failing to get above 48 percent in matchups with Democrats. And 45 percent of voters wanted to impeach and remove him from office.

Trump treats these fellow citizens as aliens. He’s going out of his way to gut the state’s clean air standards, to turn the Eden of its public lands over to industrial pillagers and to cast its immigrant strivers as criminals. He has done nothing — rebuffing the state’s plea for additional housing vouchers for the poor — to mitigate the homeless crisis. He’d prefer a dystopia on the Pacific, largely because he lost the Golden State by more than four million votes.

And yet Californians, those who still proudly call it home and those who left their hearts there, could be the force that sends him packing.

Posted by Michael-in-Norfolk at Saturday, February 15, 2020