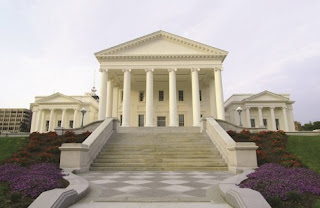 Speaking with Governor Ralph Northam last month in Richmond following the Virginia 2019 elections that saw Democrats retake control of both houses of the Virginia General Assembly, he said he wanted Democrats to "be bold" on the issue of LGBT rights.  Democrats now in control of the House of Delegates and Virginia Senate appear to be doing just that and are making the passage of LGBT non-discrimination laws a priority for the 202 legislative session ( no doubt to the horror of the hate merchants at The Family Foundation).  A ban on conversion therapy is also apparently in the works. All of which underscores the reality that elections do matter and that every vote is critical - ask Nancy Guy who beat a Republican by a little more than two dozen votes.  While vacationing last week, I came across a piece that looks at the Democrat agenda on finally enacting LGBT protections long blocked by Republicans.  Here are highlights:

“Virginia needs comprehensive protections for our LGBT brothers, sisters, friends, co-workers,” said Filler-Corn during a press conference at the Pocahontas State Office Building near the Virginia Capitol in Richmond. “And in 2020 I’m here to tell you we will deliver them.”

The bill about which Filler-Corn and others at the press conference spoke would ban discrimination based on sexual orientation and gender identity in employment, housing and public accomodation. Filler-Corn noted Virginia is one of 30 states “where members of the LGBTQ community are not explicitly protected from discrimination.”

“We’re long overdue in protecting Virginia’s LGBT community,” she said. “It is unacceptable to me, to others and clearly the voters that in 2019 a Virginian can be fired or evicted or denied service at a restaurant because of who they are and who they love.”

Roem after she defeated Republican challenger Kelly McGinn on Election Day told the Washington Blade “its time for us to pass a Virginia version of the Equality Act.”

This is wonderful news!! May the legislation pass quickly and go to Northam's office for signing.
Posted by Michael-in-Norfolk at Wednesday, January 01, 2020