"Conservative" Religion Is Fueling Hate and the Partisan Divide 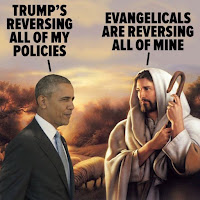 As regular readers know, I view religion as one of the most poisonous forces throughout human history that has fueled hatred, violence, and mass murder over and over again over the centuries with any beneficial side effects some argue religion provides being far out weighed by the negatives. Religion has time and time again been used to label others as "other" and/or worthy of death, be it in India and Pakistan, the Middle East, 17th century France, or Northern Ireland.  In the age of Trump, religion - in this case "conservative" Christianity is repeating religion's toxic impact on society and fueling political partisanship and a willingness on the part of Republicans to destroy America's democracy in order to cling to power. In my view, no true follower of Christ can be a Trump supporter or Republican nowadays and those who do so put their hypocrisy and moral bankruptcy on open display as they support the caging of children, white supremacy and a man who is the personification of the seven deadly sins.  A lengthy piece at CNN looks at religion's toxic role in dividing American society.  The good news is that over the long term, conservative Christianity is dying in America.  It's death cannot come soon enough in my opinion.  Here are article excerpts:

The religious and cultural divide between Democratic and Republican voters is widening, pointing toward even greater partisan polarization and social tension as the nation careens into a possible impeachment vote against President Donald Trump and potential record turnout in the 2020 presidential election.

An extensive national study released Monday by the nonpartisan Public Religion Research Institute showed that voters in each party now hold antithetical views not only on issues that dominate the immediate political debate -- such as health care and impeachment -- but also on deeper changes in the nation's demography, culture, race relations and gender roles, according to detailed results the institute provided to CNN.While whites who identify as Christians still represent about two-thirds of all Republicans, they now compose only one-fourth of Democrats, according to results provided by the Pew Research Center from a new study it released last week. Americans unaffiliated with any religion, and racial minorities who identify as Christians, now each make up a bigger share of the Democratic coalition than white Christians do, Pew found. Both groups remain only relatively minor components of the GOP coalition.

On the religious front, just as in those other arenas, the groups that favor Democrats are clearly growing. Not only have the religiously unaffiliated expanded since 2009 from about 1 in 6 to 1 in 4 adults, but the share of Americans who ascribe to non-Christian faiths, a group that also leans strongly Democratic, has edged up from 5% to 7% of the population over that time, Pew found. Simultaneously, white Christians have fallen as a share of all American adults -- from just over half in 2009, according to Pew and other data, to around two-fifths today.

The challenge for Democrats is that their potential gains from the growing groups are being muted by an increasing tilt toward the GOP among the groups that are shrinking, in this case whites who identify as Christian. (The same dynamic is evident among other contracting groups such as whites without college degrees.)

Trump has accelerated the trends on both sides of that equation, consolidating the GOP's position among blue-collar, older, non-urban and evangelical whites at the price of sparking intense resistance among younger, white-collar, nonwhite and metropolitan voters.

Democrats rely on voters who reflect the nation's growing racial and religious diversity, while the contracting population of white Christians -- especially white evangelical Protestants -- tilt more toward the GOP as a vehicle to protect values and a vision of America that they believe is under siege from the forces of change.Across the key changes reshaping American culture, the two groups rendered almost inverse verdicts.On gender, roughly three-fifths of adults who approve of Trump agreed that "these days society seems to punish men just for acting like men." Three-fourths of adults who disapprove of Trump disagreed.The divide between the two sides was even more pronounced on issues relating to race. Fully 68% of those who approve of Trump agreed that "Today, discrimination against whites has become as big a problem as discrimination against blacks and other minorities." Three-fourths of those who disapprove of Trump disagreed with that sentiment.At the heart of these contrasts are the inimical views of white evangelical Protestants and religiously unaffiliated Americans (of all races), which now arguably represent the core of each party's coalition.While two-thirds of white evangelicals, for instance, say discrimination against whites is as big a problem as discrimination against minorities, more than 7 in 10 among the religiously unaffiliated disagree. Two-thirds of white evangelicals say immigrants are "invading" America; three-fourths of the religiously unaffiliated disagree. Three-fourths of white evangelicals say socialists have taken over the Democratic Party; two-thirds of the unaffiliated say racists now control the Republican Party.[T]he long-run threat to Republicans clearly emerges from these new studies: The party, especially as defined by Trump, faces huge resistance among the groups that are growing in society, while the groups most drawn to his racial nationalism -- such as white evangelicals -- are shrinking.Given that pace of change, it's an open question how long Republicans can rely on the Trump strategy of squeezing bigger margins from shrinking groups. On most key measures, from racial diversity to the shift away from Christian faiths, the changes reshaping America are more pronounced among the youngest generations. Among adults younger than 30, only 1 in 4 are white Christians, the Public Religion Research Institute found, with the religiously unaffiliated and those who practice non-Christian faiths accounting for nearly half and non-white Christians making up the remaining fourth.

This wave of new data on religion and partisan allegiance underscores the broader conclusion that American politics in 2020, and likely for years beyond, promises an epic collision between what America has been and what it is becoming.

Posted by Michael-in-Norfolk at Wednesday, January 01, 2020