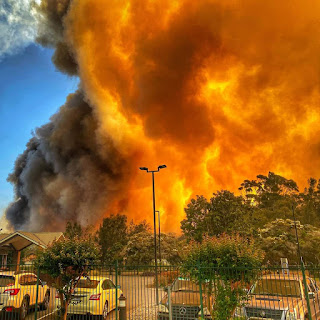 UPDATE:  Consider making a donation to help those impacted through the Australian Red Cross here.

In the realm of politics, I have often lamented the apathy and disinterest of so many when it comes to voting and making sure one is well informed.  A classic was the so-called soccer moms who obsessed over PTA gossip and children's sports while being totally oblivious to political issue that would impact their lives and the lives of their families far more.   Frighteningly, a similar phenomenon appears to be happening with the threat of global warming and climate change even as the East Coast of the USA faces dire sea level rise and large parts of Australia burns as that continent is experiencing record heat.  In Australia, huge areas have already burned, thousands of homes have been destroyed and perhaps a half billion animals have perished. The photos in this post are from a reader who took this photos from his home last month. He recounted that the experience was terrifying as the town's shopping district burned.  A piece in New York Magazine looks at the frightening apathy of so many - including media outlets - to life threatening climate change.  Here are article highlights:

Right now, on the outskirts of a hyper modern first world megapolis, at the end of a year in which the public seemed finally to wake up to the dramatic threat from global warming, a climate disaster of unimaginable horror has been unfolding for almost two full months, and the rest of the world is hardly paying attention.

[T]he response to what’s transpired in Australia — again, over a period that has stretched into months — is unfamiliar, to me at least, and not in a good way. Those California fires transfixed the world’s attention, but while the ones still burning uncontrolled in Australia have gotten some media attention outside the country, in general they have been treated as a scary, but not apocalyptic, local news story.

What accounts for the difference? There are all the usual factors—the desire to look away, to avoid contemplating the scariest aspects of contemporary life or what they portend for our future, the shortsightedness of the media, reluctant to cover climate disasters, at least as climate disasters, and the forces of denial now seemingly embodied as much by Australian prime minister Scott Morrison (who was elected on a campaign pitched against climate action and who blithely took a long holiday in Hawaii while his country burned) as they are by Donald Trump or Jair Bolsonaro.

But two additional explanations suggest themselves to me, neither at all encouraging.

The first is that the duration of this climate horror has allowed us to normalize it even while it continues to unfold — continues to torture, and brutalize, and terrify. The Camp Fire in Paradise, California did almost all of its damage in just four hours, and the short duration may have been as important to our collective horror as the speed. Perhaps if it had lasted longer, even burning with equal ferocity, we would nevertheless simply have gotten used to it as the white noise of catastrophe all around us, as impossible as that may seem to imagine, given the scale of suffering involved.

This hypothesis is especially concerning, of course, given the way that climate change will inevitably extend these sorts of horrors in the decades ahead. Today, there are categories of natural disasters, like droughts, we understand can last for months, or even years, and though they should demand our attention, rarely do. . . . But regarding the fires themselves — which can travel 60 miles per hour or more, creating their own weather systems that project lightning strikes miles away from the blaze, causing more fire — not as a sudden catastrophe but a semi-permanent condition strikes me as another level of normalization entirely. And yet here we are.

The second explanation is perhaps even more distressing. If you had told me, even six months ago, that a climate disaster like this one would strike a place like Australia, I probably would not have expected global wall to wall media coverage — seeing these Sydney opera house against an eerie backdrop of orange smoke makes for spectacular footage, but it’s perhaps less ripe fodder for social media than watching the Kardashians evacuate the valley by Instagram story — but I would have expected a lot more than this.

That’s not because of high-minded faith in the media, or public interest in harrowing stories like these. It’s for a more sinister reason: for decades now, in the U.S. and Western Europe, we have paid much, much more attention to even small-scale suffering by the force of natural disaster when it strikes parts of the wealthy west than we ever muster for those suffering already so dramatically from climate change in Asia and especially in the global south.

That set of prejudices is a moral outrage, and an especially concerning feature of the global response to climate change, which is already punishing the developing world in ways almost no one in the wealthy west would consider conscionable — if they let themselves see it. But it has also proven maddeningly stubborn, and I would not have expected the same prejudices to blind the sympathy and empathy of millions across the U.S. and Europe to the plight of a mostly white, English-speaking “First World” former colony like Australia, however far away, in the face of disaster.

The global response to the bushfires has suggested, unfortunately, something more like the opposite: that no bind of tribal alliance or allegiance is strong enough that we won’t discard it, if discarding it allows us to see the suffering of those living elsewhere on the planet as insignificant to our own lives. These fires are just one disaster, of course, and the planet has many test cases like it ahead. But it would be among the most perverse grotesqueries of climate change if it brought about the end of these kinds of global prejudices — not to be replaced with a sense of common humanity but a system of disinterest defined instead by ever smaller circles of empathy. 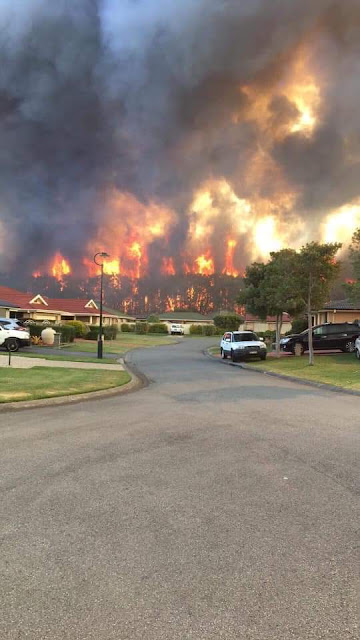 Posted by Michael-in-Norfolk at Thursday, January 02, 2020