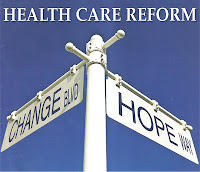 A prior post made the case that in the 2018 mid-term elections, Democrats who ran on a Medicare for All platform did significantly worse than those who supported a more modest, staged approach to reforming the nation's health care coverage problem.  This has not deterred Bernie Sanders - who in my view should not even be allowed to run as a Democrat after he quickly jettisoned the Democrat Party after 2016 - and his followers who want an immediate single payer system regardless of the fact that a majority of Americans are not supportive of blowing up the current system overnight.  Lately, Elizabeth Warren seems to be moderating her proposals to more of a staged approach that would not end employer based coverage in one fell swoop.  Perhaps Warren is beginning to see political reality or perhaps its an attempt to address the criticisms and counter proposals of Buttigieg and others. A column in the New York Times looks at how health care reform continues to be a positive for Democrats and how a staged approach to reform may be the only one that is realistically feasible.  Here are column highlights:


Recent state elections — the Democratic landslide in Virginia, followed by Democratic gubernatorial victories in Kentucky and Louisiana — have been bad news for Donald Trump.

Among other things, the election results vindicate polls indicating that Trump is historically unpopular. All of these races were in part referendums on Trump, who put a lot of effort into backing his preferred candidates. And in each case voters gave him a clear thumbs down.

Beyond offering a verdict on Trump, however, I’d argue that the state elections offered some guidance on an issue that has divided Democrats, namely health care. What the results suggested to me was the virtue of medium-size reform: incremental enough to have a good chance of being enacted, big enough to provide tangible benefits that voters don’t want taken away.

Remember, there was a third governor’s race, in Mississippi, in which the G.O.P. held on. . . . So what made the difference?

But there’s another difference among the three states. Kentucky and Louisiana took advantage of the Affordable Care Act to expand Medicaid, leading to steep drops in the number of uninsured residents; Mississippi hasn’t. This meant that voting Democratic in Kentucky and Louisiana meant voting to preserve past policy success, while the same vote in Mississippi was at best about hope for future reform — a much less powerful motivator.

It took years to get there, but in the end Pelosi [in 2010] was proved right, as health care became a winning issue for Democrats. In the 2018 midterms and in subsequent state elections, voters punished politicians whom they suspected of wanting to undermine key achievements like protection for pre-existing conditions and, yes, Medicaid expansion.

And this political reality has arguably set the stage for further action. At this point, as far as I can tell, all of the contenders for the Democratic presidential nomination are calling for a significant expansion of the government’s role in health care, although they differ about how far and how fast to go.

Which brings me to the latest development in intra-Democratic policy disputes: Elizabeth Warren’s proposal for a two-step approach to health reform. Her idea is to start with actions — some requiring no legislation at all, others requiring only a simple Senate majority — that would greatly expand health insurance coverage. These actions would, if successful, deliver tangible benefits to millions.

They would not, however, amount to the full Bernie, eliminating private insurance and going full single-payer. Warren still says that this is her eventual intention, and has laid out a plan to pay for such a system. But any legislative push would wait three years, giving time for voters to see the benefits of the initial changes.

Sanders supporters are, predictably, crying betrayal. For them it’s all or nothing: a commitment to single-payer has to be in the legislation from Day 1.

The trouble with such demands, aside from the strong probability that proposing elimination of private insurance would be a liability in the general election, is that such legislation would almost certainly fail to pass even a Democratic Senate. So all or nothing would, in practice, mean nothing.

The lesson I take from the politics of Obamacare, however, is that successful health reform, even if incomplete, creates the preconditions for further reform. What looks impossible now might look very different once tens of millions of additional people have actual experience with expanded Medicare, and can compare it with private insurance.

Although I’ve long argued against making Medicare for All a purity test, there is a good case for eventually going single-payer. But the only way that’s going to happen is via something like Warren’s approach: initial reforms that deliver concrete benefits, and maybe provide a steppingstone to something even bigger.

I continue to view both Sanders and Warren as un-electable especially given the demographics and mind sets in the hand full of swing states that will decide who wins the Electoral College even if that individual loses the popular vote by many millions of votes.
Posted by Michael-in-Norfolk at Tuesday, November 19, 2019