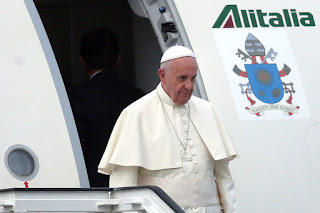 Pope Francis remains utterly inconsistent on the treatment of LGBT individuals.  He recently hatred directed at LGBT individuals and stated that that government leaders targeting LGBT people remind him of the Nazis.  Yet at the same time, the Roman Catholic Church's dogma that demonizes gays and refers to us as "intrinsically disordered."  I'm sorry, but Francis doesn't get to have it both ways especially when he, as Pope has the power to change the Church's position by pronouncing "ex cathedra" a new position on homosexuality by relying on Roman Catholic doctrine that a Pope speaking ex cathedra on issues of faith or morals is infallible.  The reality is that Christian missionaries (and Islamic fundamentalist) exported anti-gay hatred across the globe and until all religious leaders reject this agenda of hate, LGBT people will continue to suffer, sometimes losing their lives. A piece in The Advocate looks at Francis' welcomed statements and his failure to change the Church's condemnation of gays:

Pope Francis said on Friday that government leaders targeting LGBTQ people remind him of the Nazis.

In Rome, the pope warned members of the International Association of Penal Law, "I confess that when I hear some speeches by someone responsible for public order or a government, I am reminded of Hitler's speeches in 1934 and 1936,” according to CNN.

"They are typical actions of Nazism which with its persecutions of Jews, gypsies, people of homosexual orientation, represent a negative model 'par excellence' of a throwaway culture and a culture of hate,” he continued.

Francis did not refer to any specific governments, but LGBTQ people are subject to persecution all over the world. This month alone, five men in Malaysia were sentenced to caning and jail time for attempting gay sex. Ugandan police rounded up more than 100 people at an LGBTQ-friendly bar in Kampala. Activists went on trial after being arrested at a Pride march in Ankara. Marriage equality was overturned in the Cayman Islands. And trans women of color continue to face an epidemic of violence in the United States.

DignityUSA Executive Director Marianne Duddy-Burke . . . . said she hopes Francis’ remarks “are also understood to be applicable within the Church, and that Catholic leaders who say hateful, disparaging and dehumanizing things or act to limit the human rights of LGBTQ people and others immediately change their ways.”[M]any point out that the Catholic church’s teachings on LGBTQ issues have not changed. As The Advocate reported in April, Francis “has also said gay priests are not welcome in the church. He has met with gay and transgender people who described his manner as loving and supportive, yet he has said same-sex couples don’t meet the church’s definition of family and denounced gender-affirmation procedures. The church remains intractably opposed to same-sex relationships; Catholics with same-sex attractions should never act on them, according to church doctrine.”


Is Francis a hypocrite?  You decide, but I am inclined to say "yes."
Posted by Michael-in-Norfolk at Sunday, November 17, 2019