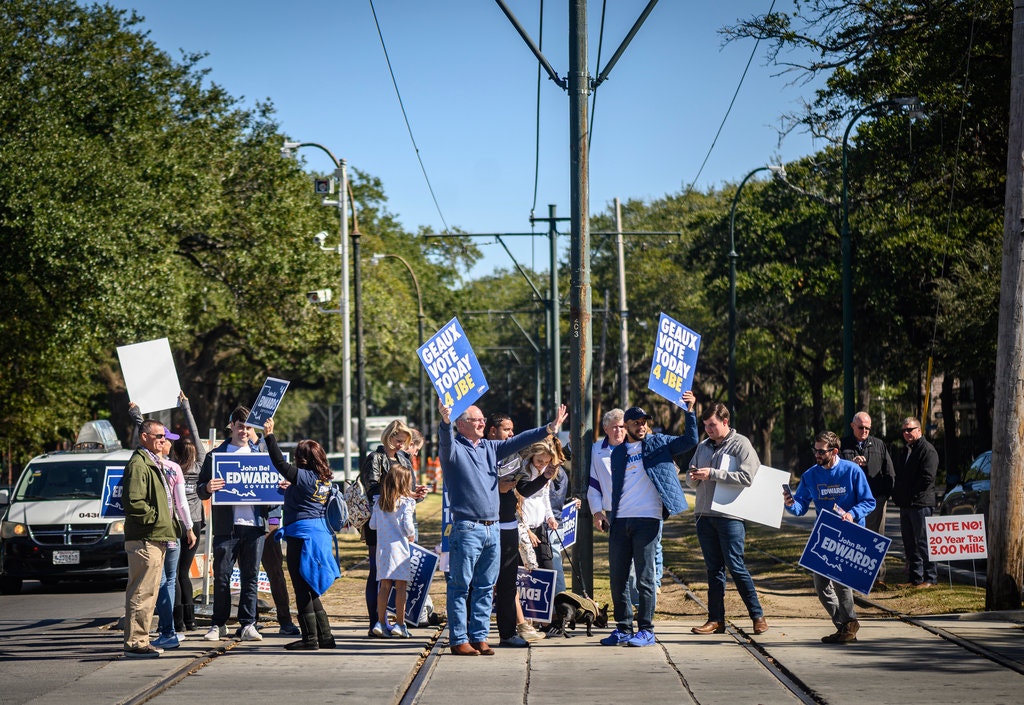 In another blow to Donald Trump's fantasy that he can invincibly mobilize his toxic base to defeat Democrats merely by tweeting and holding rallies,Democrat John Bel Edwards won reelection yesterday in Louisiana.  Among popular measures Edwards had oversee during his first term were Medicaid expansion and criminal justice reforms, plus passage of a sales tax to address the budget disaster left by his Republican predecessor, Bobby Jindal who, like GOP extremist Sam Brownback in Kansas proved GOP tax cut policies are disastrous.  A piece in the Washington Post looks at Edwards' win and the erosion of governorships held by Republicans during Trump's time in office.  Here are story excerpts:


Louisiana Gov. John Bel Edwards was elected to a second term on Saturday, overcoming opposition from President Trump and an increasingly polarized state electorate to hand Democrats their second major victory in a governor’s race over the past two weeks.

Edwards, 53, was running against Republican businessman Eddie Rispone, 70, in a runoff election after neither candidate won an outright majority of votes last month.

Edwards’s victory is another setback for Trump, who traveled to Louisiana twice over the past month to campaign for Rispone and sent a series of tweets urging Republicans to vote. [Trump's] The president’s popularity in the South has failed to prop up GOP candidates in two of the three states that held gubernatorial elections this year, allowing Democrats to gain governorships for the third consecutive year.

In Kentucky, Democratic Attorney General Andy Beshear unseated Republican Gov. Matt Bevin this month. In January, 24 of the nation’s governors will be Democrats, up from 15 at the end 2017.

The Louisiana election caps off a grueling campaign in which Edwards, a relatively conservative Democrat, worked to prove his party could still lead a state that has continued to drift to the right in the Trump era.

[Trump] The president made another pitch for Rispone on Saturday.  “Louisiana, 3 hours left, get out and Vote for @EddieRispone for Governor,” he tweeted. “Lower taxes and much more!”

But Edwards, who was minority leader in Louisiana’s House of Representatives before being elected governor in 2015, has remained relatively popular throughout his term and was optimistic his reelection bid could withstand the head winds of national politics, including the ongoing drama in Washington over the impeachment inquiry.

“We need to keep moving forward, and we can’t take a chance of going back,” Edwards said at a campaign event in New Orleans this past week.

After he succeeded Gov. Bobby Jindal (R), Edwards worked with a Republican legislature to balance the budget, imposing a sales tax increase. He also successfully fought to expand Medicaid under the Affordable Care Act, which extended coverage to nearly a half-million residents. The governor also pushed to hike teacher pay while working to drive down the state’s unemployment rate to the lowest level in more than a decade.

One of Edwards’s most high-profile accomplishments has been legislation reworking the criminal justice system in a state that had one of the nation’s highest and most racially unbalanced incarceration rates. The bipartisan legislation, which reduced sentences for some drug crimes and made it easier for some inmates to seek parole, could cut the state’s prison population by 10 percent over a decade, according to the Pew Charitable Trusts.Democrats have made a net gain in governorships for the third consecutive year. The party picked up seven governorships last year in the 2018 midterm elections, including winning several Midwestern states that Trump carried in 2016.

Posted by Michael-in-Norfolk at Sunday, November 17, 2019