Prior post on this blog looked at the issues of (i) black homophobia presenting an obstacle to Pete Buttigieg, especially in the early primary state of South Carolina, and (ii) Buttigieg has jumped to the lead in Iowa based on the most recent polling. I return to the first topic because statistician wonk Nate Silver has put together data (see the chart above) that suggests that black homophobia is real even as two prominent black columnists in the New York Times and the Washington Post have tried to depict reporting on the reality of black homophobia as a lie promoted by "white liberals."  Here's a portion from the Times piece:

Reducing Pete Buttigieg’s struggle to attract black support solely to black homophobia is not only erroneous, it is a disgusting, racist trope, secretly nursed and insidiously whispered by white liberals with contempt for the very black people they court and need.


The Post piece isn't any better as this quote indicates: "all the armchair pundits — and actual pundits — perpetuating the lie that blacks are more homophobic than anyone else are smearing African Americans as a whole, . . . "

Like it or not, Silver's data indicates that there IS a serious gap in support of LGBT rights among blacks as a whole compared to other racial demographics that actively vote in primaries.  Does this mean that all blacks are homophobic?  Of course not, but it does suggest that blacks' demand support for their rights that they are not willing to extend to others who are targets of society at large.  Here in Hampton Roads we recently saw this double standard writ large when Virginia Beach Human Rights Commissioner LaKendrick El who is black said horrible things about LGBT individuals as a class of people.  El was eventually forced to resign but in the process damaged the image of the Commission he had served on and possibly alienated some in the LGBT community from being supportive of black civil rights and/or black politicians.  Lurking behind such homophobia is religion, one of the most toxic forces in the world.  In the case of El, he is a Muslim and in the case of many blacks they belong to evangelical churches that are often anti-gay. 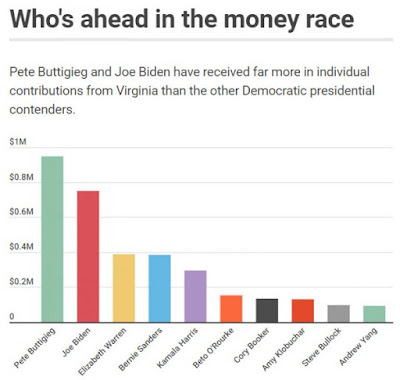 The second topic merits further consideration for several reasons.  One is Buttigieg's fundraising prowess.  As Outwire757.com is reporting and the graph above indicates, here in Virginia, Buttigieg has raised more money - in some cases far more money - than any of the other Democrat presidential primary candidates.  This, combined with the recent Iowa poll results have made Buttigieg a target for his rivals and their supporters as explored by a piece in Vanity Fair:

Pete Buttigieg entered the 2020 race as a longshot. But the 37-year-old South Bend mayor has since demonstrated exceptional staying power, captivating moderates and many in the donor class, and establishing himself as part of the top tier of candidates. Now, he’s doing more than surging in polls; he’s starting to lead them.

While that surely sends a jolt through the other Democrats vying for the party nod, it has also sounded alarms among Republicans. “He’d be a fresh face with a message of unity and a more traditional Democratic program that’s not as scary to suburbanites,” Karl Rove told Axios Monday. Some top Trump advisers are reportedly worried that Buttigieg is “more talented than Joe Biden” and “will be harder to brand as a leftist radical.”
Buttigieg’s star has risen in tandem with increasing concern among the party establishment that Biden is carrying too much baggage to defeat Donald Trump, and that Warren and Sanders are too far left. Buttigieg has appealed to the party’s moneyed centrists by taking a middle-of-the-road approach, relying less on a bold agenda and more on soaring rhetoric evoking Barack Obama’s calls for unity.
Such appeals have earned him large crowds, growing support, and the attention of big donors. But they’ve also rankled other Democrats . . . . Many of Buttigieg’s detractors view his approach as an inadequate response to an openly corrupt president who’s left some Americans feeling uniquely vulnerable. He’s invited serious questions about his ability to tackle those issues, struggling to make inroads among black and minority voters.

That could weigh Buttigieg down in the early primary state of South Carolina. But a win in Iowa, the first contest of the Democratic primary, could deliver him significant momentum, forcing the political world to take him seriously, and potentially damaging the campaigns of the other leading candidates. A Buttigieg victory, after all, would raise questions both about Biden’s electability—his primary selling point—and the electorate’s appetite for the progressive visions of Warren and Sanders. With plenty at stake, Buttieg may start getting the frontrunner treatment—particularly at Wednesday night’s Democratic debate.

Where all of this goes, nobody knows.  That said, if the black community displays homophobia towards Buttigieg, they may well undermine support for their own cause among some in the LGBT community and turn a situation where two groups that should be allies find themselves something less and as a result are less cohesive and effective at creating much needed change.  Trump and Republicans need to remain the focused enemy.
Posted by Michael-in-Norfolk at Monday, November 18, 2019

Oh, they're trying to find excuses to attack Pete (the person appearing in one of his commercials is a stock image! Scandal!!) and that's a signal that they're scared. They better be.
I don't think he'll be the nominee but I do think he'll make a great VP or member of the next Dem cabinet.