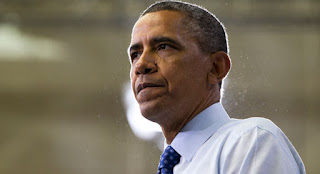 As an earlier post noted today, Barrack Obama cautioned Democrats to not lose touch with political reality of what the American public opinion supports.  He also reminded Democrats that the lead up to his 2008 nomination had been "robust" and bruising.  While not naming them, Obama appeared to be taking shots at Bernie Sanders and their followers who live in a bubble and are out of touch with main stream Americans who want improvements and change, but not a revolution and turning health care upside down.  This comes on the election of moderate Democrats win in Louisiana and Kentucky.  The message - which Nancy Pelosi has echoed - is that a centrist candidate is more likely to see electoral success in 2020.  A piece in New York Magazine looks at Obama's comments.  Here are highlights:

[O]n Friday evening, he [Obama] climbed onto a stage in a basement ballroom in Washington’s Mandarin Oriental hotel and asked his party’s liberal elite to chill out a bit.

“We have a field of very accomplished, very serious, and passionate, and smart people who have a history of public service, and whoever emerges from the primary process, I will work my tail off to make sure they are the next president,” he told the room of a few hundred of the party’s biggest donors and top strategists, gathered for a conference of the Democracy Alliance group.

Obama signaled for the first time a willingness to try and modulate his party’s debate — in this case to a less frantic tenor. “To those who get stressed about robust primaries,” he added, fully embodying this new slightly exasperated adult-in-the-room role, “I just have to remind you: I had a very robust primary.”

Yet Obama’s remarks were not only aimed at the donors and chatterers. He had a sterner-than-usual warning for the campaigns, too. While over the last year-plus he has been sparing in weighing in on individual primary flash points, here he cast himself as understanding but concerned emissary to what he perceives as political reality. “This is still a country that is less revolutionary than it is interested in improvement,” he said. “The average American doesn’t think we have to completely tear down the system and remake it.” In Obama’s telling, Americans are conservative, not in ideology, but in temperament.

Voters, including Democrats, are not driven by the same views that are reflected on certain left-leaning Twitter feeds, or the activist wing of our party,” he warned. “And that’s not a criticism to the activist wing — their job is to poke and prod and text and inspire and motivate. But the candidate’s job, whoever that ends up being, is to get elected.”

It’s a vision that clashes with some on his party’s left, most obviously including supporters of Bernie Sanders and Elizabeth Warren. And while he dismissed the debate between persuading voters and energizing base Democrats as “a false division,” he explained that he’d been thinking about how the candidates have been talking about him on the trail. “I think it is important for candidates to push past what I was able to achieve as president.

“I think it is very important to all the candidates who are running, at every level, to pay some attention to where voters actually are, and how they think about their lives. And I don’t think we should be deluded into thinking that the resistance to certain approaches to things is simply because voters haven’t heard a bold enough proposal, and as soon as they hear a bold enough proposal that’s going to activate them. Because you know what? It turns out people are cautious, because they don’t have a margin for error.”Onstage, Obama stuck to most of his personal Trump-era rules: He didn’t mention the president, or the news of the day — in this case the impeachment hearings. He didn’t mention any of the presidential candidates by name, either. But his remarks, delivered onstage next to Stacey Abrams, painted the clearest picture yet of Obama’s view of the primary, and of the direction of his party in the Trump era. And his timing sent as much of a message to the operatives in the room, and the candidates in the race, as his words.

Posted by Michael-in-Norfolk at Sunday, November 17, 2019