Sondland Leaves No Other Option Than Impeachment 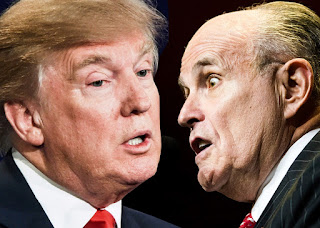 Yesterday's testimony of Gordon Sondland, a Trump $1 million contributor and hardly one to be labeled a Never Trumper, has set the stage for a moment of truth for the Republican Party as a whole and Congressional Republicans in particular.  Either they support the U.S. Constitution and the concept that no one is above the law or they don't.  Indeed, if they do not impeach and vote to convict Trump, they will be violating the oaths of office that each one of them took and will be confirming that the GOP is now the party of corruption and lawlessness.  If the GOP still was the party that I had once belonged to, a delegation would be preparing to visit the White House and tell Trump that he needs to resign - the same may end up applying to Mike Pence as well who seems to have been a co-conspirator despite his game of amnesia and denial. Sadly, today's GOP is no longer that party and its base is controlled by racists, white supremacists, religious extremist and greed driven multi-millionaires and billionaires. If Republicans refuse to do their constitutional duty, they need to be voted out of office  at every level by the public who must now demonstrate that the rule of law still matters.  A column in the New York Times neatly lays out why their is no option but impeachment and removal of Trump from office.  Here are highlights:


History will remember Wednesday as the day a United States ambassador testified under oath before Congress and laid out a clear, simple and damning case that President Trump abused the power of his office and committed bribery, an act for which the Constitution leaves but one outcome.

The evidence was already overwhelming, but now there can be no question about it: Ambassador Gordon Sondland’s testimony was the smoking gun.

This is largely because the facts presented are simple. At the direction of Mr. Trump and Rudy Giuliani, his personal lawyer, United States officials communicated to the government of Ukraine that a White House visit for the new Ukrainian president was contingent on the Ukrainian president publicly announcing investigations into the dealings of former Vice President Joe Biden and a conspiracy theory about the 2016 elections. Later, a congressionally appropriated $391 million military aid package was added to the leverage.

Mr. Sondland, a Trump appointee and million-dollar Trump inauguration donor, testified under oath that there was an explicit quid pro quo at the direction of President Trump, through Mr. Giuliani. The facts are not meaningfully in dispute, because Mr. Sondland’s testimony corroborates the accounts of multiple strong and reliable witnesses. Mr. Sondland made clear that there are even more people and additional documents that could corroborate his testimony, but the White House is blocking their release. The absence of these additional documents and witnesses makes it abundantly clear that the administration is obstructing Congress.In a few bombshell exchanges, Adam Schiff, chairman of the House Intelligence Committee, and the committee’s Democratic counsel, Daniel Goldman, had Mr. Sondland walk the public through each element of the federal bribery statute. Mr. Trump corruptly demanded something of value — the announcement of investigations into his political rivals — for his personal benefit, in exchange for President Trump’s performance of official acts: both hosting a White House meeting and, as Mr. Sondland came to believe, releasing the security aid.Mr. Sondland noted, “We worked with Mr. Giuliani because the president directed us to do so” and “Mr. Giuliani was expressing the desires of the president of the United States.” In fact, Mr. Trump’s insistence on using his lawyer to obtain a personal benefit at the expense of official United States policy is powerful evidence of the president’s corrupt intent.Bribery is one of the Constitution’s specific prohibitions on executive conduct, second only to treason as a reason for impeaching a president. And constitutional bribery is defined more broadly than the statute — the Constitution was written well before the federal bribery statute and was meant to capture a host of executive malfeasance that might not be captured within the narrow confines of our specific federal laws.

If we are to be, in the words of John Adams, “a government of laws, not of men,” then there is no other option after today’s testimony than the impeachment, conviction and removal from office of President Trump.


It really is that simple and my Republican "friends" have no maneuvering room around it if they are honest and moral people. Trump must go.
Posted by Michael-in-Norfolk at Thursday, November 21, 2019