Business Confidence In Trump is Collapsing 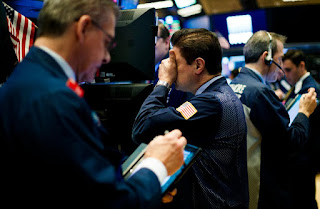 The Republican Party likes to maintain the myth that it is fiscally conservative and a friend to the business community.  Both are lies as the ballooning federal deficit due to the Trump/GOP tax cuts for the wealthy and the erratic at best Trump trade policies underscore in spades. Now, with the 2020 elections little more than a year away, it appears the economy may be headed for recession even as significant parts of the economy - agriculture and manufacturing - are already in recession thanks in no small part to Trump's trade wars. Making matters worse, the outlook of business leaders is pessimistic due in no small part to the uncertain the Trump/Pence regime casts across the business world.  As one Nobel prize winning economist states "they are facing up to the reality that Trump and his team . . . . have no idea what they’re doing" and are fearful to invest and/or expand their businesses when don't know what curve ball could be thrown there way at any moment. Here are highlights from a New York Times column that looks at the gathering clouds:


Last spring Donald Trump and the people around him probably thought they had a relatively clear path to re-election.

On one side, it looked as if Trump had weathered the threat of politically fatal scandal. The much-awaited Mueller report on Russian election intervention had landed with a dull thud; the details were damning, but it had basically no political impact.

At the same time, Trump was convinced that he could run on the basis of a booming economy.

What a difference a few months make.

Everyone is following the impeachment story, and I don’t have much to add, except a warning: At every stage of this process, Republicans have proved willing to engage in stunningly bad behavior. Did anyone foresee Wednesday’s physical attempt to disrupt the House inquiry? The point is that as the net closes in, the G.O.P. response is likely to be uglier than you can possibly imagine.

What’s getting less attention, understandably, is the way the Trump economic narrative is falling apart. . . . important parts of the economy are lagging. Manufacturing production is down over the past year; combined with weakness in shipping and very hard times in agriculture, around a fifth of the economy is effectively in recession. In particular, manufacturing employment has been falling in Michigan, Wisconsin and Pennsylvania, states that chose Trump by tiny margins in 2016, giving him a win in the Electoral College despite losing the popular vote.

And overall growth, while still positive, is definitely slowing: “nowcasts,” which use partial data to estimate what official economic data will say when it’s eventually released, suggest an economy growing at an unimpressive annual rate of less than 2 percent. . . . this is not good news for Republicans.

You can see this collapse several ways. One is through surveys of business executives, who spent Trump’s first two years being very bullish, but have now become remarkably pessimistic.

You can also see it in the bond market, a much better indicator of economic expectations than the stock market. . . . 10-year bond rates have plunged, from more than 3 percent last year to 1.75 percent as I write this. The last time we saw this kind of plunge was 2010-11, when investors finally realized that recovery from the Great Recession was going to be slow and painful, not a repeat of “morning in America.”

So what happened to the Trump boom? The collapse in confidence began late last year, when it became clear that Trump was serious about waging trade war on China; it continued as evidence accumulated that the 2017 tax cut was a big fizzle, doing basically nothing to boost business investment and providing at most a brief sugar high to overall growth.

But the truth is that even pessimists expected the tax cut to do more good, and the trade war less harm, than they did. Why have things turned out so poorly? One answer, to which I’ve subscribed, is that in addition to its direct impacts on U.S. exports and businesses that rely on Chinese suppliers, the trade war has created damaging uncertainty. Businesses that rely on global supply chains won’t invest for fear that the trade war will get even worse; but businesses that might move in to replace imports also won’t invest for fear that Trump will eventually back down.

I suspect, however, that there’s even more to the story. Business interests spent a long time in denial, but now even they are facing up to the reality that Trump and his team are very strange people who have no idea what they’re doing — and the uncertainty that reality implies.

Next year’s election should be about Trump’s betrayal of his oath of office. Realistically, however, it also matters that the economy probably won’t be his friend.

Posted by Michael-in-Norfolk at Saturday, October 26, 2019

While undoubtedly the leaders of the business community are quite happy that their own personal income taxes have dropped (unless they live in McMansions in a state that actually believes that government should provide services), very likely many are concerned about the fact that thanks to their good buddies, the federal budget deficit is nudging at a TRILLION dollars, financed noticeably by the Chinese, who seem willing to wait out a trade war launched and perpetrated by an economic nincompoop, and the Saudis and other Gulf States. Interest rates may be pretty low now, but what happens if, say, the Chinese decide to cut back noticeably on refinancing?