The Trade War’s Risks for Trump 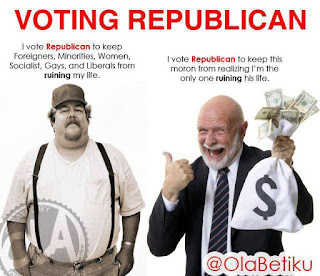 For years now the Republican Party has used appeals to racism, homophobia and evangelical Christian extremism to convince voters in their base to vote against their own economic interest.  Donald Trump has embraced this playbook with gusto and ramped it up to new levels, with outright appeals to white supremacists and Christian dominionists. Now, the question is whether his ill-conceived trade wars and the damage being wrought on agriculture and manufacturing in swing states be enough to finally convince some in the GOP base to rethink their blind support for Trump.  Given that Trump's Electoral College win - a demonstration why that antiquated system needs to be repealed - was roughly 70,000 votes spread across three states, even a slight erosion in farming and manufacturing worker support could prove fatal.  A piece in Larry Sabato's Crystal Ball looks at the situation and the evidence that at least so far, policies embracing racism, homophobia and religious extremism are still working for Trump.  Here are excerpts:


Trump has taken a hard line on trade. He’s imposed tariffs on steel, aluminum, and on a wide variety of Chinese products. In response, China has slapped tariffs on American products.

If Trump’s trade strategy poses risks for the economy, it also poses risks for his reelection strategy. That’s because farmers and manufacturers in battleground states are facing retaliatory tariffs on their products.

To measure Trump’s degree of risk, we analyzed 14 battleground states — 10 of them won by Trump in 2016 and four won by Hillary Clinton.

Eight of the battleground states we studied are reliant on manufacturing and agriculture to a greater degree than the nation as a whole. In descending order, these eight states are Iowa, Wisconsin, Michigan, North Carolina, Ohio, Minnesota, Texas, and Pennsylvania.

Notice anything about these states? Trump won seven of them in 2016, making the core of his Electoral College majority at special risk from fallout from tariffs. Especially notable is the inclusion on this list of the three narrowly divided states that made his victory possible: Michigan, Pennsylvania, and Wisconsin.

[O]nly one state saw agricultural production grow between 2017 and 2018 — Georgia. The other 13 states saw declines in the agricultural sector during that period.

And the worst-performing agricultural states? Six of the seven worst-faring farm states were won by Trump in 2016 — those same three cornerstone states (Michigan, Pennsylvania, and Wisconsin) plus Arizona, Florida, and North Carolina . . . Two other Trump states, Iowa and Ohio, also fared worse than the national average.

[T]he most recent data available — the annualized change between the fourth quarter of 2018 and the first quarter of 2019 — shows a broad manufacturing slowdown.

Ten battleground states saw lower annualized manufacturing growth in the first quarter of the year than they saw during the previous full year. These included seven Trump-won states, three of which were the pivotal ones — Michigan, Pennsylvania, and Wisconsin.A key question, though, is whether any of this will matter electorally. When we checked with political observers in these states, they said that losses among farm and factory families pose a risk to Trump’s electoral prospects, but they added that there’s little hard evidence of that happening yet.

University of Northern Iowa political scientist Christopher Larimer — who calls this “the fundamental question heading into the 2020 election” — said he has “yet to see anything” that would suggest these voters are going to abandon the GOP in significant numbers. That could change as more polls are fielded as the election approaches.

One unknown is whether Democrats make a play for these demographic groups, said Terry Madonna, director of the Franklin and Marshall College poll in Pennsylvania.

“The Democrats still have not been regularly courting the working class, except for an occasional foray into places they predominate,” he said. In Pennsylvania, he said, Democratic gains seem more likely to come from Republicans in suburban areas turning against the president.

Depressed turnout among disaffected farm and factory voters might be more likely than actually switching rural and blue-collar Republicans to support whoever the Democratic nominee is.

Especially in the three pivotal states of Michigan, Pennsylvania, and Wisconsin, it wouldn’t take much to shift the balance.

Craig Gilbert, a political journalist for the Milwaukee Journal Sentinel, has reported extensively from the swing rural areas of western and southwestern Wisconsin. He said he hasn’t encountered any sign of mass defections from the historically strong levels of Trump support in 2016, but he added that it remains an open question whether more modest shifts could occur.

Bottom line: Trump’s trade policy could weaken his support in key states, but for now at least, there’s little evidence of widespread damage to Trump’s standing among the farm and factory demographics. Until further notice, cultural issues appear to be taking prominence over economic ones.

Posted by Michael-in-Norfolk at Thursday, October 24, 2019

There’s nothing that will sway the trumpanzees. There’s no logic in their ‘white anxiety’ so...no.