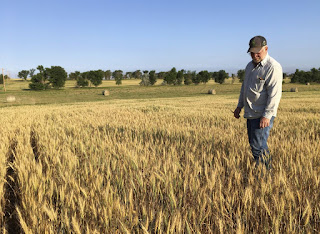 Many farmers, especially in the Mid-West voted for Donald Trump whose appeals to racism and xenophobia won them over despite the false narrative than it was financial insecurity rather than bigotry that won their votes.  Now, many are paying - in my view - a much deserved price as Trump's trade wars continue to wipe out markets for American agricultural products and leave many farmers dependent on government bailouts (something they condemn when benefiting others) to stave off bankruptcy. A piece in Yahoo News looks at this self-inflicted harm and notes how farmers want a return to "more normal times" - something that will only be achieved by voting Trump and Mike Pence out of office.  While my heart goes out to children and youths in struggling farm families, I find it hard to dredge up any sympathy for their parents who voted for Trump. Here are article excerpts:

The White House recently announced that it would be providing an additional $16 billion in aid to American farmers affected by the trade war between the U.S. and China.

But the problem for American farmers has becomes bigger than something a bailout can fix.

“This trade thing is what’s brought on by [Trump] the president and it’s really frustrating because he took away all of our markets,” Bob Nuylen, a farmer from North Dakota who grows spring wheat and sunflowers, told Yahoo Finance. “We live in an area where we’re kind of in the middle of nowhere. It costs us a lot of money — over $1 a bushel to get our grain to markets.”

Since trade tensions began in 2018, farmers have faced major financial challenges, since China was once a major U.S. agriculture buyer.

And losing customers has become a major issue. Soybean farmers have been dealing with this, as China has turned to other countries like Brazil for soybeans. Nuylen said this is also happening for wheat farmers, as China has begun importing wheat from Russian regions.

“All these countries went to different countries to get their grain,” Nuylen said. “How are we going to get the relations back with them to buy our grain again and be our customers?”

“Our prices are probably as low as I’ve seen them in a long time,” he told Yahoo Finance. “We were losing just about $70 an acre just by putting our crop in [the ground] this spring.”The Trump administration pledged two installments of a farmer bailout program. The first round of payments totaling $4.7 billion was paid in September 2018, while the second round was distributed in December. By February 2019, the total aid payments reached $7.7 billion.

“Payments are a welcome help for the bottom line of Missouri farmers,” Blake Hurst, president of the Missouri Farm Bureau, told Yahoo Finance in an email statement. “Although the trade payments vary widely from county to county, they’ll keep more than a few farmers in business for another year. ...

“Having said all that,” the statement added, “farmers are profoundly wary of the trade war, embarrassed that ad hoc government subsidies are all that stands between many of us and financial ruin, and ready for the return of more normal times.”

If these farmers continue to support Trump, they deserve any and every misfortune that befalls them. Hate, racism and bigotry need to carry a very heavy price.
Posted by Michael-in-Norfolk at Thursday, August 01, 2019