"Moscow Mitch" Fumes at Being Called Out 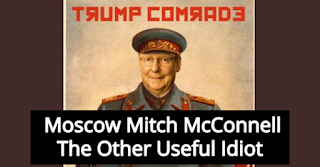 The Mueller Report and the findings of all of America's intelligence services are in agreement that Russia conducted a cyber attack on the United States in 2016 and will likely do so again in 2020.  Yet despite this unanimous view of the need for increased election security, Mitch McConnell, Republican majority leader in the U.S. Senate, has blocked all legislation that would fund beefed up cyber security and aid states in upgrading their election systems and machinery. Why? Most likely because McConnell believes Russian interference in 2020 is needed to help re-elect Donald Trump and other Republicans - including perhaps McConnell himself.  Yet McConnell bristles at the nickname "Moscow Mitch."  Sorry, but if the nickname fits and aptly describes his conduct, then I hope it sticks to McConnell like the strongest glue or adhesive.  Yes, Donald Trump is foul and an insult to common decency and morality, but so is Mitch McConnell who has proven to be one of Trump's most toxic enablers.  A piece in the New York Times looks at McConnell's efforts to make Russian interference easier and his conniption fit over being called out.  Here are excerpts:


Senator Mitch McConnell is usually impervious to criticism, even celebrating the nasty nicknames critics bestow on him. But Mr. McConnell, the Senate majority leader, is incensed by the name “Moscow Mitch,” and even more miffed that he has been called a “Russian asset” by critics who accuse him of single-handedly blocking stronger election security measures after Russia’s interference in 2016.

Democrats had been making the case for months, but it was supercharged last week by the testimony of Robert S. Mueller III, the former special counsel, who told the House Intelligence Committee that the Russians were back at it “as we sit here.”

Mr. McConnell cites several reasons for his opposition — a longstanding resistance to federal control over state elections, newly enacted security improvements that were shown to have worked in the 2018 voting and his suspicion that Democrats are trying to gain partisan advantage with a host of proposals.

But whatever Mr. McConnell’s reasoning, the criticism has taken hold — even back home in Kentucky, where the majority leader faces re-election next year.

“Democrats want more aggressive legislation to protect America’s elections after Robert Mueller’s stark warning about Russian interference,” began one report aired on a Louisville television station last week. “Mitch McConnell blocked it.”  Even President Trump felt compelled to come to his defense — as only he could.That did not relieve the heat on the majority leader, who on Monday had appeared to open the door ever so slightly to doing more on election preparedness.For once, Democrats seemed to be getting to a man who has embraced his portrayal as Darth Vader and the Grim Reaper overseeing a Senate graveyard for legislation that he opposes.Democrats pressed their advantage. And why not? The hashtag #MoscowMitchMcTraitor was trending on Twitter, and Senate Republicans of all stripes were being asked about the blockade.

Mr. Schumer has in the past suggested that another potential reason behind Mr. McConnell’s position is the thought that interference emanating from Russia could aid Republicans. “I hope it’s not because he thinks it will benefit him, because Putin could turn around in a minute, and then do things that he doesn’t like,” Mr. Schumer said in June.Mr. McConnell’s opposition to any and all election legislation has bottled up the bills in the Senate Rules Committee. The panel’s chairman, Senator Roy Blunt, Republican of Missouri, has hesitated to advance any of the measures since they would go nowhere on the floor.Proponents of the bills say they are devised to keep the states in the lead. A Democratic measure approved by the House would send more than $1 billion to state and local governments to tighten election security, but would also demand that states use the money for machines with backup paper ballots and require a national strategy to protect American democratic institutions against cyberattacks. States would be required to spend federal funds only on federally certified “election infrastructure vendors.”

A bipartisan measure in both chambers would require internet companies like Facebook to disclose the purchasers of political ads. Another bipartisan Senate proposal would codify cyberinformation-sharing initiatives between federal intelligence services and state election officials, speed up the granting of security clearances to state officials and provide federal incentives for states to adopt backup paper ballots.

All of the proposals mentioned are common sense in nature and would better protect the nation.  That McConnell opposes all of them leaves truly one conclusion: he wants Russian interference in 2020 and believes it will aid Trump and Republicans.
Posted by Michael-in-Norfolk at Tuesday, July 30, 2019