The Republican Exodus From Congress 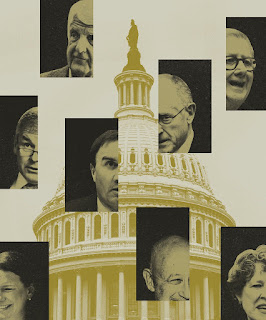 Sabato's Crystal Ball notes that one forecasting model based on postwar electoral history along with the president’s approval rating and the House generic ballot - which shows an 11 point advantage for Democrats - points to Democratic gains in 2020. Add to that Donald Trump's ongoing efforts to alienate everyone outside of his racist and religiously extreme base and it is perhaps little wonder that a number of Republican House members are announcing their retirement from Congress. Some believe there will be many more retirements which, in competitive districts offers Democrats potential seat pickups. A piece in the New York Times looks at what will hopefully be a worsen problem for Republicans - assuming, of course, Democrats do not seize defeat from the jaws of victory, always a big if.  Here are highlights from the New York Times:

On Wednesday afternoon, Representative Mike Conaway, Republican of Texas, announced that he would not run for re-election next year. At a news conference in Midland, Mr. Conaway expressed distress at the partisan dysfunction in Congress, nodded to the term limits that his party places on committee leadership positions and said he’d been pondering retirement for a year or so. He said he wanted to leave on his “own terms.”

After eight terms in the House, the 71-year-old Mr. Conaway is entitled to a new adventure. But as the fifth congressional Republican to issue a retirement announcement in the past two weeks — and the eighth this year — his decision is being received as more than a personal choice. It’s being seen as evidence that Republican lawmakers are not feeling upbeat about retaking control of the House in 2020. Some party strategists have said they expect the trend to accelerate, with another round of announcements after members return from the August recess.

Besides Mr. Conaway, Utah’s Rob Bishop confirmed his retirement on Monday, and Alabama’s Martha Roby announced hers on Friday, one day after the announcement by Pete Olson of Texas, which came one day after the announcement by Paul Mitchell of Michigan. Indiana’s Susan Brooks announced her retirement in June. Georgia’s Rob Woodall did the same in February. And in January, just two weeks after being sworn in, Pennsylvania’s Tom Marino resigned.And let’s not forget Justin Amash of Michigan, who switched from Republican to Independent in disgust on July 4.[L]awmakers often start eyeing the exits with special longing when stuck in the minority with little hope of escape. Unlike in the Senate, where every lawmaker has some ability to influence — or at least disrupt — operations, life in the House minority tends to be a soul-crushing experience.Add to this the strain of endlessly being asked to defend the rantings of a volatile president who prides himself on being offensive. While some Republican lawmakers seem to thrive in the role of Trump apologist, others find it “exhausting and often embarrassing,” as one confided to The Hill this week. “Serving in the Trump era has few rewards,” said the member.

In terms of electoral impact, not all retirements are created equal. Ms. Roby and Mr. Conaway hail from blood-red districts that the party is expected to hold. But Ms. Brooks’s district is more competitive, and Mr. Woodall’s and Mr. Olson’s are considered tossups.

Some of the departures are problematic for the party’s overall brand. Ms. Brooks and Ms. Roby are two of only 13 women in a Republican conference with 197 members. (Eighty-nine of the House’s 235 Democrats are women.)

[T]he 2020 fight promises to be bloody. Republican leaders may want to be extra nice to their team. Who knows how many other members might decide to leave on their own terms?

Posted by Michael-in-Norfolk at Thursday, August 01, 2019