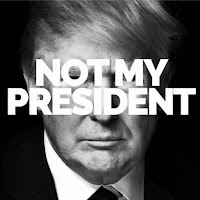 For many it is far easier to bloviate about American exceptionalism and to ignore the racism that Donald Trump both embodies and seeks to fan for perceived political advantage. But doing so betrays the many victims of America's often ugly past, especially the evils of slavery and the Jim Crow era. Slavery and racial sins are often close to mind living in Hampton, Virginia, the site where the first African slaves were brought into the British colonies that became the original states of the United States of America.  Where I sit at this very moment a mere few miles down the coast of Hampton Roads harbor from that site where the evil of slavery arrived 400 years ago this year.  Four hundred years of mistreatment and often outright horrors have been perpetrated all because some whites continue to be obsessed with being the supposed supreme or superior race. Trump intentionally continues this cancer that still haunts America. Ignoring his conduct and racism betrays the many victims of America's ugly and brutal past. While we cannot change the past, we can learn from it and vow to never ever let such hate and violence occur again.  A column in the Washington Post reminds us of just how hideous some of America's past is in fact and why we must not betray its victims.  Here are column highlights (warning, some of it is disturbing):

But I made the mistake of pulling James Cone’s “The Cross and the Lynching Tree” off my shelf — a book designed to shatter convenient complacency. Cone recounts the case of a white mob in Valdosta, Ga., in 1918 that lynched an innocent man named Haynes Turner. Turner’s enraged wife, Mary, promised justice for the killers. The sheriff responded by arresting her and then turning her over to the mob, which included women and children. According to one source, Mary was “stripped, hung upside down by the ankles, soaked with gasoline, and roasted to death. In the midst of this torment, a white man opened her swollen belly with a hunting knife and her infant fell to the ground and was stomped to death.”

God help us. It is hard to write the words. This evil — the evil of white supremacy, resulting in dehumanization, inhumanity and murder — is the worst stain, the greatest crime, of U.S. history. It is the thing that nearly broke the nation. It is the thing that proved generations of Christians to be vicious hypocrites. It is the thing that turned normal people into moral monsters, capable of burning a grieving widow to death and killing her child.

During more than 300 years of routine horrors — the slave ships, the brandings, the separation of families, the beatings, the lynchings, the constant flood of humiliation, the racist ads for soap and toothpaste, the anti-black riots, the segregation of buses and pools and schools and suburbs, the sundown towns, the kangaroo courts, the police dogs and water cannons, the church bombings, the cruel and petty tyranny of whites, reinforced by the most prominent politicians in the country — during all of this, none of the descendants of Europe were able to stamp this evil out. As James Baldwin said in 1963, “The only people in the country at the moment who believe either in Christianity or in the country are the most despised minority in it.”

Racism is the fire that left our country horribly disfigured. It is the beast we try to keep locked in the basement. When the president of the United States plays with that fire or takes that beast out for a walk, it is not just another political event, not just a normal day in campaign 2020. It is a cause for shame. It is the violation of martyrs’ graves. It is obscene graffiti on the Lincoln Memorial. It is, in the eyes of history, the betrayal — the re-betrayal — of Haynes and Mary Turner and their child. And all of this is being done by an ignorant and arrogant narcissist reviving racist tropes for political gain, indifferent to the wreckage he is leaving, the wounds he is ripping open.

I am finding it hard to look at resurgent racism as just one in a series of presidential offenses or another in a series of Republican errors. Racism is not just another wrong. The Antietam battlefield is not just another plot of ground. The Edmund Pettus Bridge is not just another bridge. The balcony outside Room 306 at the Lorraine Motel is not just another balcony. As U.S. history hallows some causes, it magnifies some crimes.What does all this mean politically? It means that Trump’s divisiveness is getting worse, not better. He makes racist comments, appeals to racist sentiments and inflames racist passions. The rationalization that he is not, deep down in his heart, really a racist is meaningless. Trump’s continued offenses mean that a large portion of his political base is energized by racist tropes and the language of white grievance. And it means — whatever their intent — that those who play down, or excuse, or try to walk past these offenses are enablers.

Some political choices are not just stupid or crude. They represent the return of our country’s cruelest, most dangerous passion. Such racism indicts Trump. Treating racism as a typical or minor matter indicts us.

The fact that evangelicals continue to overwhelmingly support Trump is an indictment of them and proof that they are morally bankrupt and have zero moral authority to lecture others.  The fact that many of my Republican "friends" conveniently look the other way is likewise an indictment of them. Anyone with a shred of moral decency in them needs to condemn and shun Trump. It is far past time when a desire for lower taxes justifies enabling outright evil.
Posted by Michael-in-Norfolk at Saturday, August 03, 2019