Boris Johnson, Brexit and the End of the United Kingdom 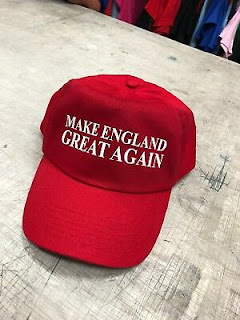 Previous posts have looked at the parallels between Trump supporters and pro-Breixt voters in the United Kingdom: both groups are motivated by racism and a longing for a past that will never return. Now, in the person of Boris Johnson, the United Kingdom has a prime minister who is the equivalent of Donald Trump who is antagonizing allies and causing division with in the country.  Some believe it could end in the dissolution of the United Kingdom, with Scotland leaving the union and Northern Ireland ultimately joining the Irish Republic.  If this happens, Brexit supporters will find themselves in a much smaller and far weaker country that will only make the past they so long for even more impossible to recreate. With both groups - Trump supporters and Breixt supporters - racism and delusions have set them on a course for long term national disaster.  A piece in the Washington Post looks at the potential collapse of the UK as a untied country.  Here are highlights:

In his first speech last week as Britain’s new leader, Prime Minister Boris Johnson exhibited his customary bravado: “The people who bet against Britain are going to lose their shirts because we are going to restore trust in our democracy,” he said, reiterating his promise to lead the country out of the European Union, “and we are going to fulfill the repeated promises of Parliament to the people and come out of the E.U. on October 31st. No ifs or buts.”

But already, it’s Johnson who is starting to look like the prime minister with no clothes.

On Tuesday, the British pound dropped to its lowest level in two years, a reaction to growing alarm over the likelihood of Johnson’s government crashing Britain out of Europe in a “no-deal” Brexit. His cabinet is packed with hard-line Brexiteers who, like Johnson, want to see Brexit achieved at almost any cost. One minister has already indicated that the government is operating under the “assumption” that it must prepare for a “no-deal” departure: a scenario that would see tariffs immediately slapped on British exports to the continent, financial chaos, lines and delays at border checks, and an endless assortment of other (in some cases, still unforeseen) problems.

Johnson, undaunted, has engaged in a game of brinkmanship with Brussels and Dublin. Over the weekend, he talked tough on his Brexit intentions, voicing his opposition to the “Irish backstop” — the current understanding forged between Britain and the European Union that would preserve a soft border between Ireland and Northern Ireland and therefore theoretically keep all of Britain in the E.U.’s customs union.

Officials in Brussels, meanwhile, may be hoping that Johnson is compelled to blink first and that Britain’s Parliament acts to block a no-deal Brexit. That also may be a scenario Johnson actually wants. Another impasse at Westminster could prompt a snap general election that may yield a Parliament more inclined to back Johnson’s agenda.

[T]he domestic picture for Johnson is hardly rosy, either. For two days in a row, the prime minister was greeted by jeering crowds of protesters as he embarked on a tour of the United Kingdom’s home nations. On Monday, he received an icy welcome from Nicola Sturgeon, the first minister of Scotland, and was compelled to leave her residence in Edinburgh through a back door to avoid the angry demonstrations.

The next day in Wales, Johnson met a similarly dubious Welsh first minister. Mark Drakeford, a member of the opposition Labour party, warned in an interview with the Guardian that a no-deal Brexit would endanger Wales’s agricultural and manufacturing sectors and “a whole way of life that has existed for centuries.” He stressed that Johnson’s characteristic “bluff and bluster” was testing the unity of the United Kingdom itself.

“The prime minister’s twin ambitions are on a dangerous collision course,” noted an editorial in the Financial Times, referring to Johnson’s stated desire to both strengthen ties among Britain’s four home nations and lead the country swiftly out of the European Union. “Brexit in any shape promises to weaken the bonds between the nations of the British Isles. In the extreme form that seems to be the working assumption by Johnson’s new administration, it will impose intolerable strains. This could set in train a process that ends with the break-up of the union.”

On Tuesday, almost a full week after taking office, Johnson placed his first phone call to Irish Prime Minister Leo Varadkar. Their exchange was reportedly “testy” and not particularly productive. According to an Irish readout, Varadkar reminded Johnson that the backstop was “a consequence” of Britain’s political decision to embark on Brexit and that Ireland had the full strength of the E.U. behind it.

On Friday, Varadkar hinted at the possibility of Northern Ireland severing its ties with the United Kingdom in the event of a no-deal Brexit. “I think increasingly you see liberal Protestants and Unionists who will start to ask where they feel more at home,” he said. “One of the things that ironically could really undermine the union of the U.K. is a hard Brexit, both for Northern Ireland and for Scotland, and that is a problem they are going to have to face.”

Vladimir Putin must be truly smiling.
Posted by Michael-in-Norfolk at Wednesday, July 31, 2019