Will Gays Be Virginia Republicans' 2019 Bogeyman? 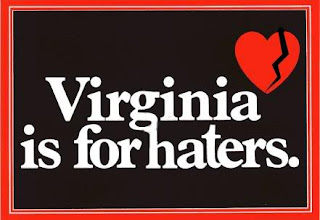 For many years the three pillars of the Virginia Republican Party's get out the vote effort has been god - claiming to be the party of true Christians - guns - opposing any form of gun control - and gays - depicting gays as perverts who threaten families and children. With control of the Virginia General Assembly at stake in Virginia's November 2019 elections, early indications are that the Virginia GOP will likely double down on all three as the campaign season heats up.  On guns, the arrogant adjournment of the special session on gun control that Democrats will be depicted as seeking to confiscate guns.  On the issue of gays, recent attacks on Adam Ebbin, Virginia's sole gay state senator, suggests gays - and the likely enactment of LGBT non-discrimination protections by a Democrat controlled General Assembly - may once again be demonized to excite the bigoted GOP base in Virginia.  A piece in The Washingtonian looks at shots made against Ebbin. Here are article highligts:

Shortly before the Fourth of July, a rather remarkable set of quotes appeared in the Washington Post.

Virginia state Senator Adam Ebbin, a speaker intoned at a recent National Rifle Association event in Fredericksburg, is “the only openly gay senator in our Senate” and has an agenda that “means infanticide is coming, all the gun bills.” State Senator Bryce E. Reeves claimed Ebbin supported raising the minimum wage to as much as $25 and that he’d heard Ebbin say Democrats planned to “radically change Virginia” if they won control of the state this fall.

The nasty comments, which came just days before a scheduled special legislative session on gun control, were taken as a sign of how polarized the state had become. But they also thrust Ebbin into the headlines in a way he wasn’t expecting—although he’s long been a champion for LGBTQ rights in Virginia, he didn’t think his colleagues would invoke his identity to turn off voters.Why Ebbin? It doesn’t take a keen political strategist to come up with a theory: In a state increasingly torn between its growing urbanized population around Washington and a beleaguered rural conservative demographic, a gay liberal from the DC suburbs makes a great target. “I was really disappointed to be used as a bogeyman to divide Virginians just because of who I am,” Ebbin says. “My sexual orientation shouldn’t be relevant to gun safety.”

November’s general election will determine whether Virginia Democrats will take back control of the House and Senate, where Republicans currently hold a razor-thin majority. If that theory is correct, Ebbin’s name may ricochet around a lot more political events in the Virginia’s red areas before this state election cycle is done.

Ebbin was born in Long Island in 1963. His passion for politics began in grade school, where he would walk around his classrooms wearing a “Ford for President” button and worked for a moderate New York Republican running for Congress. While his party affiliation has shifted, his interest in legislation hasn’t waned.

In 1989, his college friends tipped him off about a reasonably priced condo in Alexandria, which was all of the convincing he needed to move to the area. In 1992, he co-founded the Virginia Partisans Gay/Lesbian Democratic Club and spent several years working on the campaigns of two gay elected officials, Arlington County Board’s Jay Fisette and Alexandria City Council’s Paul Smedberg. As a day job, he sold advertising space for Washington City Paper.

Ebbin says that he felt isolated when he first arrived in Richmond. “In 2004, there was a lot of hostility to LGBT people with anti-gay legislation, whether it was anti-gay adoption, anti-gay straight alliance, anti-gay marriage,” he says. “But I’m proud to say that has changed drastically; we’re in a position where we’re promoting pro-LGBT legislation, and I’ve been really honored to carry legislation for non-discrimination in hiring and housing in Virginia.”

After eight years in the House of Delegates, Ebbin ran for the Virginia Senate. His platform focused on defending LGBTQ Virginians, investing in public schools, and welcoming immigrants. He faced the first Republican who bothered to contest the district since 1999 and won with 64.7 percent of the vote. He’s run without a Republican opponent ever since and represents south Arlington, parts of Alexandria, and Mount Vernon—an increasingly diverse, growing area that’s an example of the sweeping demographic and political changes in the state.

Reeves sort of apologized to Ebbin: “I certainly meant no disrespect to him or anyone in the LGBTQ community,” he told the Richmond Times-Dispatch. Ebbin says the two have been in touch briefly since the comments surfaced. He’s saddened by the rift, but he says it makes fits the tone set by the current occupant of the White House. “As long as the current president is in office, Trump will divide people among Virginia just as he is across the country.” As an important election approaches, Ebbin says, “you never know what tactics Republicans will turn to next.”


LGBT Virginians best brace themselves for yet another round of attacks from Virginia Republicans.
Posted by Michael-in-Norfolk at Sunday, July 28, 2019