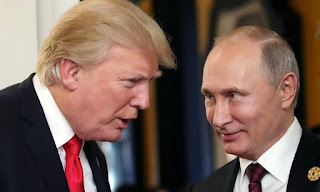 Personally, I had hoped that Robert Mueller would give Donald Trump an early Christmas gift on Friday and release indictments against Jared Kushner.  Sadly, that did not happen but it now appears that the FBI is investigating a defunct bank in Cyprus that may have been a conduit for moving illegal Russian funds into New York City and other real estate ventures.  If this happened, Trump, of course, would likely have been a recipient of such illegal funds. From there it is easy to conjecture that Vladimir Putin viewed this as a way to conspire with and meanwhile get blackmail information on Trump.  Given Trump's past history of deals with the Mafia and other underworld figures, it truly isn't much of a stretch to believe that Trump would be all in on such an arrangement, especially if it brought much needed cash to prop up Trump's precarious real estate empire.  A piece in The Guardian looks at the FBI investigation and how it could add to Trump's legal nightmares.  Here are excerpts:

The FBI has asked officials in Cyprus for financial information about a defunct bank that was used by wealthy Russians with political connections and has been accused by the US government of money laundering, two sources have told the Guardian.

The request for information about FBME Bank comes as Cyprus has emerged as a key area of interest for Robert Mueller, the US special counsel who is investigating a possible conspiracy between Donald Trump’s 2016 presidential campaign and the Kremlin.

People familiar with the FBI request told the Guardian that federal investigators and the US Treasury approached the Central Bank of Cyprus in November seeking detailed information about FBME, which was shut down this year.

One person familiar with the FBI request said it appeared to be connected to Mueller’s ongoing examination of Paul Manafort, the former Trump campaign manager who was indicted in October, and money that flowed between former Soviet states and the US through Cypriot banks.

FBME has vigorously denied accusations that it has been a conduit for money laundering and other criminal activity.

Bloomberg said the Russia-related investigation, which is being led by the US attorney’s office in New York, was connected to a flow of illegal Russian funds into the New York real estate market.

FBME, previously known as the Federal Bank of the Middle East, was based in Tanzania but about 90% of its banking was conducted in Cyprus. A report by the US Treasury’s Financial Crimes Enforcement Network (FinCEN) in 2014 said the bank was an institution of “primary money laundering concern”.

The report found that the bank was evading efforts by the Central Bank of Cyprus to supervise its activities, and that FBME was facilitating money laundering, terrorist financing, transnational organised crime, fraud, sanctions evasion, weapons trading and political corruption. . . . . about half of the bank’s clients were Russian nationals, including Vladimir Smirnov, who is close to Putin, and Aleksandr Shishkin, a member of Putin’s political party.

It is not clear why Mueller and his team of investigators appear to be interested in FBME’s financial data. But it indicates that the special counsel is continuing to examine money flows from Cyprus.

Manafort has pleaded not guilty to charges that he laundered millions of dollars through foreign banks as part of a scheme to hide his work for political parties in Ukraine. He is accused of funnelling the funds through foreign shell companies, including many that were based in Cyprus.

Mueller’s team has separately issued a subpoena for information from Deutsche Bank. According to a person close to the bank, the subpoena was issued in the autumn. The German bank is Trump’s biggest lender.

Deutsche also worked as a correspondent bank for FBME. Internal emails seen by the Guardian show that executives from both banks were in contact in 2014 discussing accounts that were “on the radar” of US law enforcement.

Deutsche Bank said in a statement: “We severed our relationship with FBME in 2014 and have added more than 1,000 anti-financial crime staff in recent years to make our business safer and increase our controls.”

Posted by Michael-in-Norfolk at Sunday, December 24, 2017