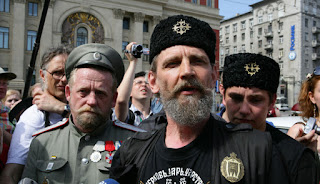 As noted many times on this blog, Donald Trump's most enthusiastic supporters are evangelical Christians whose self-styled "leaders" met with Trump in New York in June, 2016, where they were basically promised the moon by Trump.  Among the promises made were an unrelenting attack on LGBT rights and so far Trump has delivered through rescinding Obama pro-LGBT executive orders and even having the U.S. Department of Justice argue in briefs to the United States Supreme Court that anti-gay discrimination is perfectly fine.  But there is another place where the government's anti-gay agenda is being loudly applauded by these same evangelical "leaders": Russia.  Indeed, by prostituting himself to the reactionary and homophobic Russian Orthodox Church, Vladimir Putin has been described by these "leaders" as defending Christianity.  Thus, it is instructive to look at what has transpired in Putin's Russia where saying anything construed as being LGBT supportive can lead to one's arrest.  A piece in the New Yorker reminds of the horrors occurring in Russia.  Horrors the evangelicals would like to bring to America.  Here are article excerpts:

I can think of only two times it’s happened to me: I read a news story, or even a series of stories, and thought that it contained such extreme exaggerations that it had to be, essentially, false. . . . I have known violence to be insidious, messy, trivialized by all participants, even as it happens, and these stories seemed to paint the exact opposite picture. These stories were preposterous—the word Hannah Arendt used in explaining why the world was so slow to understand the murderous threats posed by Hitler and Stalin.

The first story emerged in Russia about four years ago. Reports claimed that organized groups of young men were entrapping gay men, torturing them on camera, and posting the videos. I had a hard time believing that the effort was as well organized and widespread as the reports claimed. I have since learned that it was much more widespread than initially reported. Vigilante groups continue to entrap gay men in several Russian cities.

This spring, I didn’t believe a story that claimed that authorities—no longer vigilantes but actual police—in Chechnya were rounding up and torturing gay men, and that some of these men had apparently been killed, while others were released to their relatives, who were instructed to kill the men themselves.

I flew to Moscow in late May to report the story of the men who had been able to flee Chechnya, and at that time I still couldn’t quite imagine the scale of the purges. I dropped my bag at a hotel and immediately headed to one of the safe houses. It had been difficult to get people to agree to talk with me, and I feared giving them time to change their minds. I spent the rest of the evening and half of the night talking to victims of the Chechen attacks, and went back again the next day, and the day after that. . . . . I developed short-hand notations for the executioners’ repertoire: electrocution, solitary-confinement cells, beatings, dunking in a vat of cold water, starvation.

Back in New York, I sorted through my notes on the men’s personal tragedies. There was the guy whose name had been given up by someone he seemed to have loved—and who was now presumed dead. There was the man who had left his lover behind. And there were several men who were married to women, and had children they adored, who were struggling to figure out how to save their own lives and keep their families. There were several very young men who desperately missed their mothers but also knew that their families would probably kill them if they made contact.

By the end of the year, the Russian L.G.B.T. Network and the Moscow L.G.B.T. Community Center had succeeded in getting a hundred and six people out of Chechnya and then out of Russia altogether. A handful of people with no special training and very little funding at the start managed to save a hundred and six people from certain death. . . . . Toward the end of the summer, my contacts in Moscow told me that they were wrapping up their effort. They thought that they were about to send the last of their charges out of the country. But then people kept coming.

So far, most of the men they have helped have gone to Canada. A few have landed in Latin America and in Europe. Many of them fear going to countries with large Chechen diasporas, where they are likely to be targeted again in exile. None of the men appear to have made it to the United States. . . . with the Trump Administration reshaping this country’s immigration landscape, it’s hard to imagine this country welcoming many Muslim gay men, even when they are fleeing mortal danger.