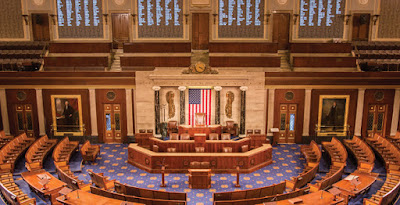 One of the lessons of the Democrat tide in Virginia this past November is that to flip seats Democrats MUST have candidates running against Republican incumbents.  In Virginia, few Republicans went unchallenged and the result was at least 15 seats in the House of Delegates were flipped, the most amazing being where Democrat Danica Roem, a transgender woman defeated GOP arch homophobe and gay hater, Bob. Marshall.  As a story in the New York Times reports, Democrats are seeking to apply a similar formula nationally and force Republicans unaccustomed to serious challenges to have to fight for their seats.  Thus, even if the Democrat in a district loses, the GOP has been forced to expend money and resources that otherwise might have been redirected to other districts to ward off a surprise defeat.   The other lesson that I hope the national Democrats learn is the importance that the coordinated "ground game" or "field game" played in Virginia.    Here are article highlights:

Representative Pete Sessions, a veteran Republican, was re-elected to his affluent Dallas-area House seat in 2016 with 71 percent of the vote, the remaining 29 percent split between the Libertarian and Green Party candidates.

Hillary Clinton won the district by three percentage points, but no Democratic candidate even showed up to ride her coattails.

Federal Election Commission filings show that if a wave crashes on the Republican House majority in November, as many have predicted, Democratic surfers will be on their boards to catch it. Nearly a year out from the election, Democratic candidates have filed in all but 20 House districts held by Republicans. By comparison, Democrats in 80 districts do not have a Republican opponent for their seat.

The Democrats are not just filing to run in districts where Mrs. Clinton performed well. They are also running for conservative seats that were uncontested in 2016 and where Republicans remain heavy favorites, in states like Texas, Arkansas and Nebraska. “I started seeing changes to U.S. policy that concern me,” said Sara Dady, one of the candidates. “I’ve been practicing immigration law under three administrations. I have a client who has a green card. He did everything right. He was denied boarding. To me that is not the America I know and love.”

Democrats are investing in candidates like Ms. Dady. She attended three trainings before declaring her candidacy, including events hosted by the Illinois Democratic County Chairmen’s Association and Representative Cheri Bustos, who represents another Illinois district.

Even with the political wind at their backs, most Democratic challengers will be underdogs.  “Incumbents have a lot of built-in advantages,” said Michael Beckel of the bipartisan campaign finance reform group Issue One. “They have higher name recognition, and they can spend a lot of time building up a huge campaign war chest to ward off opponents. Additionally, interest groups in Washington are incentivized to bet on incumbents.”

But at least the Democrats have the candidates.  “If you have a candidate running,” Mr. Beckel said, “your odds of picking up seats increases.”

Democrats need to retake control of the House of Representatives to (i) block the Trump/Pence agenda, and (ii) if we are lucky, to move on impeachment if Robert Mueller delivers the goods on Trump (and I hope Pence)..
Posted by Michael-in-Norfolk at Monday, December 25, 2017