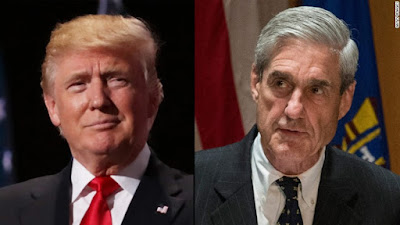 Even as Trump and company are laying plans to smear former Trump BFF Mike Flynn, other reports suggest that special counsel Robert Mueller is amassing a great deal of new evidence and that Trump's claims that the investigation is winding down are pure fantasy.  Of equal fun is the talk that Jared Kushner is hiring a crisis management PR firm indicating that he may be fearful of being indicted (personally, I would have loved to see Kushner indicted the Friday before Christmas!).  Hence the increasing Republican attacks on Robert Mueller and the FBI - anything to distract the public and/or to endeavor to build a case plausible to the Trump/Pence base - but not to sane and rational people - for firing Mueller.  Yahoo News has a summary of where things stand at the moment.  Here are highlights:

As described by sources familiar with various aspects of the investigation, the Mueller probe is fast approaching a critical crossroads. The president’s lawyers, Ty Cobb and John Dowd, are pressing Mueller to wind down the investigation and exonerate their client, which they have assured the president will happen by early next year.

But the sources familiar with the probe say that such a rapid conclusion is — as one put it — “fanciful.” Mueller and his team, they say, are pursuing new leads, interrogating new witnesses and collecting a mountain of new evidence, including subpoenaed bank records and thousands of emails from the campaign and the Trump transition.

In just the last few weeks, his prosecutors have begun questioning Republican National Committee staffers about the party digital operation that worked with the Trump campaign to target voters in key swing states. They are seeking to determine if the joint effort was related to the activities of Russian trolls and bots aimed at influencing the American electorate, according to two of the sources.

In what is potentially another ominous sign for the White House, the lawyer for Jared Kushner, the president’s son in law and senior adviser who was in charge of the campaign’s digital operation, recently began searching for a crisis public relations firm to handle press inquiries — a step frequently taken by people who believe they may be facing criminal charges. Even if the new lines of inquiry don’t result in additional indictments — something unknowable at this point — the new material all but guarantees the Mueller investigation will stretch on for months, if not years, likely provoking Trump to revisit his decision not to fire the special counsel.

And if the president does take that step, many lawmakers and legal veterans say, it will cause a political explosion unlike any the capital has seen in decades. “It will be cataclysmic,” said Richard Ben-Veniste, a former Watergate prosecutor who lived through the so-called Saturday night massacre when President Richard Nixon fired special prosecutor Archibald Cox. “It will create a constitutional crisis.”

[F]or Democrats, the attacks on Mueller and the FBI are a distraction tactic meant to obscure how much has already been uncovered about the Trump team’s contacts with the Russians. Back in January, when the issue first starting getting political traction, the president and his top aides denied that he and his campaign had any connections to Moscow. “I have nothing to do with Russia,” Trump tweeted at the time.

Since then, Mueller’s team and congressional investigators have detailed numerous contacts, meetings and email exchanges between Trump’s campaign and Russian-connected operatives and officials that were unknown to the public when voters went to the polls in November 2016.

“Just from what’s been made public, it’s pretty clear the Trump campaign and family were willing and eager to work with the Russians,” said Rep. Eric Swalwell, D-Calif., a member of the House Intelligence Committee. “They showed almost no restraint in engaging with the Russians to see what they had to offer on their opponent. It was a ‘whatever it takes’ mentality.”

Whether all this adds up to “collusion” — the sensational charge of active collaboration between the Trump campaign and Moscow that was first laid out in the controversial dossier commissioned by the Clinton campaign — is far from clear. But for Swalwell and quite a few others, it is already clear that the Russian probe has been far more than a witch hunt.

Posted by Michael-in-Norfolk at Thursday, December 28, 2017