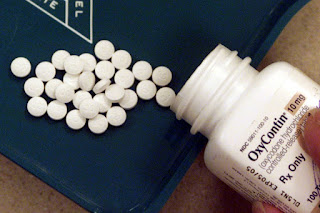 I will be honest right up front.  I fully support a single payer health care system that would put healthcare insurance companies as we know them out of business.  Having done legal work for a hospital system and physicians in the past, the former, like health insurers, care only on maximizing profits despite advertisements to the contrary, while the latter are largely restricted in the practices by what health insurers will pay.  Prescribing a pill to mask the symptom is so much cheaper than addressing the true under lying cause.  And, of course, the insurers care nothing about a preventative approach to medicine.  Put all of this in the context of the opioid crisis in America and there's a reason why other advanced industrialized nations are not experiencing a similar crisis: they have universal health care systems that take an entirely different approach to health care.  America's health care system is literally killing tens of thousands of citizens.  A piece in the Washington Post looks at this reality - something that neither Trump or Congressional Republicans will admit, much less address.  Here are article highlights:

For the second year in a row, life expectancy in the United States has dropped.

It is not hard to understand why: In 2016, there was a 21 percent rise in the number of deaths caused by drug overdoses, with opioids causing two-thirds of them. Last year, the opioid epidemic killed 42,000 people, more than died of AIDS in any year at the height of the crisis.

“We should take it very seriously,” Bob Anderson, chief of the Mortality Statistics Branch at the National Center for Health Statistics, told my colleagues Lenny Bernstein and Christopher Ingraham. “If you look at the other developed countries in the world, they’re not seeing this kind of thing. Life expectancy is going up.”

What explains the discrepancy?  The U.S. medical system.

Americans are prescribed opioids significantly more often than their counterparts in other countries. In the United States, 50,000 opioid doses are taken daily per every million residents. That is nearly 40 percent higher than the rate in Germany and Canada, and double the rate in Austria and Denmark. It is four times higher than in Britain, and six times higher than in France and Portugal.

That is in large part a result of our health insurance structure. Unlike countries that provide universal health care funded by state taxes, the United States has a mostly privatized system of care. And experts say insurers are much more likely to pay for a pill than physical therapy or repeat treatments. “Most insurance, especially for poor people, won't pay for anything but a pill,” Judith Feinberg of the West Virginia University School of Medicine told the BBC.  . . . . the best thing is physical therapy, but no one will pay for that. So doctors get very ready to pull out the prescription pad. . . . . . As a result, Americans were being prescribed opioids. Often, they were given several more pills than they could be expected to use, to avoid repeat visits.

There are other culprits, too. The United States is one of only two countries that allow prescription drug companies to advertise on television. (The other is New Zealand.) The companies do advertise, a lot. In 2016, pharmaceutical companies spent $6.4 billion on advertising. Experts say, too, that U.S. medical schools have not done enough to educate students on pain management, addiction and opioid use and abuse.

Drug companies also try to woo physicians with gifts. Some companies host fancy dinners, and others sponsor conferences and junkets. In 2016, for example, OxyContin maker Purdue Pharma spent $7 million on gifts to doctors and teaching hospitals. . . . .  In the same period, the company doubled its sales force, distributing coupons so doctors could offer patients 30-day supplies of OxyContin and other highly addictive drugs. In those six years, prescriptions for OxyContin jumped from 670,000 to more than 6 million.

That alarmed at least one public-health group, which ran a 2009 bulletin titled, “The Promotion and Marketing of OxyContin: Commercial Triumph, Public Health Tragedy.”  By then, it was too late.

Posted by Michael-in-Norfolk at Friday, December 29, 2017