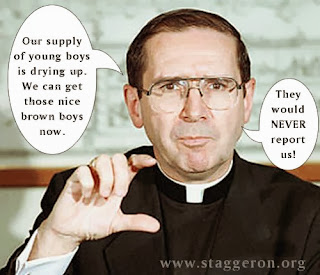 Few things pushed me more to leave the Roman Catholic Church more than the sex abuse scandal that exploded in Boston in 2002.  As time went by, it became clear that Boston was not some anomaly but rather symptomatic of a worldwide problem and a worldwide conspiracy orchestrated from the Vatican to cover up widespread sexual abuse of children and youth.  The problem, in my view tracks back to three main sources: (i) the celibacy requirement for priests, (ii) the Church hierarchy's bizarre obsession with all things sexual, and (iii) the priesthood providing a safe hiding place for pedophiles and others not  emotionally/psychologically mature.  The Los Angeles Times has a lengthy piece on Cardinal Roger Mahony who oversaw wide spread cover ups during his tenure.  The article quickly makes it clear that protecting children and youths was not a priority.  Here are some excerpts:

Mahony typed up a detailed account of the conversation and placed it in the priest's confidential file, meticulous record-keeping that distinguished the archbishop from his predecessors.

By the time the holidays were over, Baker had been sent to a New Mexico treatment center for accused pedophile priests. Police weren't notified. Victims weren't contacted.  It would become a familiar pattern.

Mahony and his aides insisted on secrecy even when lives were at risk. In one case, the archdiocese was informed that a man dying of AIDS had been having sex with a parish priest, who in turn was abusing high school students. At the time, the average life expectancy after an AIDS diagnosis was 18 months. Yet church officials did nothing to alert the priest or the students. "People involved in these activities usually are aware of these matters," a Mahony aide wrote.

Mahony's schedule brought him in regular contact with the police chief and the district attorney, but he never mentioned the accused abusers in his ranks or reported them to law enforcement. In private memos, he discussed with aides how to stymie police.

Mahony and his aides selected therapists who they knew wouldn't report abuse to authorities, and urged suspected molesters to remain out of state to avoid police investigations and lawsuits. Mahony ordered one priest who had admitted preying on as many as 20 children to stay away from California "for the foreseeable future" to avoid prosecution.

Inside the Los Angeles Police Department's Sexually Exploited Child unit, detectives had come to think of clergy cases as a footrace against the chancery. When a tip about a priest came in, the starting gun went off.

LAPD policy was to notify the archdiocese when an investigation was underway. But once the church was informed, Barraclough said, "we knew that the suspect, 99% sure, that he was going to be out of the country or out of state."

Detectives begged parents not to inform the church and held off telling their own supervisors, Barraclough said in an interview, buying time to talk to witnesses, track down other victims, and seize toys and photos from rectories.

"They lied as bad as any thug or ex-con I've ever come across on the street," Lyon recalled in an interview. "They were more interested in saving the reputation of the church than helping us find these young victims."

[L]ocked cabinet in the archdiocese headquarters, files bulged with evidence that Mahony was covering up sexual abuse of children.

Manila folders alphabetized by abusers' names contained letters from distraught parents, graphic confessions from priests, and memos between the archbishop and his aides discussing how to stymie police investigations and avoid lawsuits.

There is much more in the article which deserves a full read.  Many have gushed over Pope Francis' purported changed atmosphere at the Vatican.  However, until Francis takes strong action against Mahony and a multitude of other members of the Church hierarchy who acted as Mahony did, any perceived change will be merely a facade.  And the Church leadership will remain morally bankrupt.

Posted by Michael-in-Norfolk at Monday, December 02, 2013