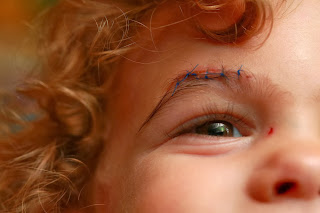 This blog often looks at America's broken health care system which is the most costly in the world and least efficient in delivery of services of any developed nation.  Yet the Republican Party would repeal the Affordable Health Care Act and condemn Americans to remain victims of this broken system.  How bad has America's system become?  A piece in the New York Times looks at the soaring costs where a single stitch for a cut can cost $500.00.  It's beyond ridiculous, yet that's the system preferred by the GOP, especially those in the House of Representatives.  Here are story excerpts:

SAN FRANCISCO — With blood oozing from deep lacerations, the two patients arrived at California Pacific Medical Center’s tidy emergency room. Deepika Singh, 26, had gashed her knee at a backyard barbecue. Orla Roche, a rambunctious toddler on vacation with her family, had tumbled from a couch, splitting open her forehead on a table.


On a quiet Saturday in May, nurses in blue scrubs quickly ushered the two patients into treatment rooms. The wounds were cleaned, numbed and mended in under an hour. “It was great — they had good DVDs, the staff couldn’t have been nicer,” said Emer Duffy, Orla’s mother.

Then the bills arrived. Ms. Singh’s three stitches cost $2,229.11. Orla’s forehead was sealed with a dab of skin glue for $1,696. “When I first saw the charge, I said, ‘What could possibly have cost that much?’ ” recalled Ms. Singh. “They billed for everything, every pill.”

In a medical system notorious for opaque finances and inflated bills, nothing is more convoluted than hospital pricing, economists say. Hospital charges represent about a third of the $2.7 trillion annual United States health care bill, the biggest single segment, according to government statistics, and are the largest driver of medical inflation, a new study in The Journal of the American Medical Association found.

A day spent as an inpatient at an American hospital costs on average more than $4,000, five times the charge in many other developed countries, according to the International Federation of Health Plans, a global network of health insurance industries. The most expensive hospitals charge more than $12,500 a day. And at many of them, including California Pacific Medical Center, emergency rooms are profit centers. That is why one of the simplest and oldest medical procedures — closing a wound with a needle and thread — typically leads to bills of at least $1,500 and often much more.

At Lenox Hill Hospital in New York City, Daniel Diaz, 29, a public relations executive, was billed $3,355.96 for five stitches on his finger after cutting himself while peeling an avocado. At a hospital in Jacksonville, Fla., Arch Roberts Jr., 56, a former government employee, was charged more than $2,000 for three stitches after being bitten by a dog. At Mercy Hospital in Port Huron, Mich., Chelsea Manning, 22, a student, received bills for close to $3,000 for six stitches after she tripped running up a path. Insurers and patients negotiated lower prices, but those charges were a starting point.

In other countries, the price of a day in the hospital often includes many basic services. Not here. The “chargemaster,” the price list created by each hospital, typically has more than ten thousand entries, and almost nothing — even an aspirin, a bag of IV fluid, or a visit from a physical therapist to help a patient get out of bed — is free. Those lists are usually secret, but California requires them to be filed with health regulators and disclosed.

Posted by Michael-in-Norfolk at Tuesday, December 03, 2013