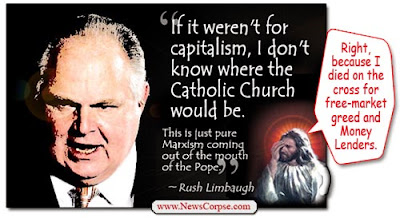 I will not try to pretend that I like Rush Limbaugh - not even remotely.  The man is a loud mouth bully, a hypocrite, and he preaches a message that is generally the antithesis of the Gospel message.  Ironically, Limbaugh was thrilled by Pope Francis at first because of Francis' anti-abortion positions and affirmation of marriage as being only for heterosexuals.  The honeymoon, if you will, proved to be short lived.  Once Francis released his new exhortation that condemned unfettered capitalism and wealth inequalities, Limbaugh went into attack mode.  Here's a sampling via Daily Kos:

I mentioned, last night -- I was doing show prep last night -- usual routine. And I ran across this -- I don't actually know what it's called -- the latest papal offering, statement from Pope Francis. Now, up until this -- I'm not Catholic. Up until this, I have to tell you, I was admiring the man.

"Pope Francis attacked unfettered capitalism as 'a new tyranny.' He beseeched global leaders to fight poverty and growing inequality, in a document on Tuesday setting out a platform for his papacy and calling for a renewal of the Catholic Church. In it, Pope Francis went further than previous comments criticizing the global economic system, attacking the 'idolatry of money.' "

I've gotta be very caref-- I have been numerous times to the Vatican. It wouldn't exist without tons of money. But, regardless, what this is -- somebody has either written this for him or gotten to him. This is just pure Marxism coming out of the mouth of the pope. There's no such -- "unfettered capitalism"? That doesn't exist anywhere.

This batshitery from the thrice divorced Limbaugh was more than Andrew Sullivan could stomach and Sullivan sliced and diced the rantings of Limbaugh.  Here are excerpts:

The Pope of the Catholic Church really is offering a rebuttal to the Pope of the Republican party, which is what Limbaugh has largely become. In daily encyclicals, Rush is infallible in doctrine and not to be questioned in public. When he speaks on the airwaves, it is always ex cathedra. Callers can get an audience from him, but rarely a hearing. Dissent from his eternal doctrines means excommunication from the GOP and the designation of heretic. His is always the last word.

And in the Church of Limbaugh, market capitalism is an unqualified, eternal good. It is the ever-lasting truth about human beings. It is inextricable from any concept of human freedom. The fewer restrictions on it, the better. In that cocooned, infallible context, of course, Pope Francis is indeed a commie:

Listen to this.  This is an actual quote from what he wrote.  “The culture of prosperity deadens us.  We are thrilled if the market offers us something new to purchase.  In the meantime, all those lives stunted for lack of opportunity seem a mere spectacle.  They fail to move us.”  I mean, that’s pretty profound.  That’s going way beyond matters that are ethical.  This is almost a statement about who should control financial markets.  He says that the global economy needs government control.  I’m telling you, I’m not Catholic, but I know enough to know that this would have been unthinkable for a pope to believe or say just a few years ago.

Really? Limbaugh specifically invokes the great anti-Communist Pope, John Paul II, as an alleged contrast with this leftist gobbledegook. So let us look at John Paul II’s discussion of capitalism and communism in his 1987 Encyclical, Sollicitudo Rei Socialis:

The tension between East and West is an opposition … between two concepts of the development of individuals and peoples, both concepts being imperfect and in need of radical correction … This is one of the reasons why the Church’s social doctrine adopts a critical attitude towards both liberal capitalism and Marxist collectivism.

My italics. The church has long opposed market capitalism as the core measure of human well-being. Aquinas even taught that interest-bearing loans were inherently unjust in the most influential theological document in church history.

Jesus radically taught us to give up all our possessions, to renounce everything except our “daily bread”, to spend our lives serving the poverty-stricken takers rather than aspiring to be the wealthy and powerful makers. He told the Mark Zuckerberg of his day to give everything away to the poor, if he really wanted to be happy.

Limbaugh has obviously never read the Gospels. He has never read the parables. His ideology is so extreme it even trashes, because it does not begin to understand, the core principles of capitalism, as laid out by Adam Smith. Market capitalism is and always has been a regulated construction of government, not some kind of state of nature without it.

But let us return to Limbaugh’s hero, John Paul II, this time in Centesimus Annus, written in the wake of Soviet Communism’s demise:

The Marxist solution has failed, but the realities of marginalization and exploitation remain in the world, especially the Third World, as does the reality of human alienation, especially in the more advanced countries. . . . there is a risk that a radical capitalistic ideology could spread which refuses even to consider these problems, in the a priori belief that any attempt to solve them is doomed to failure and which blindly entrusts their solution to the free development of market forces.

My italics again. Could anyone have offered a more potent critique of current Republican ideology than John Paul II? Could anything better illustrate John Paul II’s critique of radical capitalist ideology than the GOP’s refusal to be concerned in any way about a fundamental question like access to basic healthcare for millions of citizens in the richest country on earth?

Nothing better demonstrates the antipathy of the current Republican right to Christianity – indeed its constant, relentless war on Christianity – than the following refreshingly candid confession of spiritual barrenness from Limbaugh:

I want to go back to this quote from the pope again, from his — there’s the name for the document.  I can’t think of it and I don’t have it in front of me.  “The culture of prosperity deadens us.  We are thrilled in the market offers us something new to purchase.  In the meantime, all those lives stunted for lack of opportunity seem a mere spectacle.  They fail to move us.”  I’m not even sure what the connection there is.

Limbaugh’s only recourse when faced with actual Christianity is to conspiracy theories about translations of the Pope’s words. Perhaps it’s the commies who have perpetrated a massive lie through their control of the media. That was Sarah Palin’s response to, when confronted with, you know, Christianity for apparently the first time. But you sense that even Rush is beginning to realize there is something more to this, something that could be very destructive to his sealed, cocooned, materialist ideology of one.

Despite the Republican Party's feigned fealty to Christian values, neither today's GOP nor the far right Christians are Christian in any way other than lip service.  They are a foul pestilence on America.

Posted by Michael-in-Norfolk at Tuesday, December 03, 2013