Who Is Tom Daley's Boyfrend? 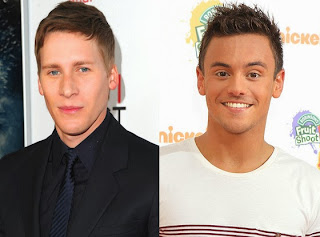 I try not to be a gossip columnist but this is too good to pass up. E! News is claiming that Tom Daley's as yet unnamed boyfriend is Dustin Lance Black.  Having met and talked with Black three different times, I can say this: he's nice as can be and very easy on the eyes.  Mr. Daley, of course, is very easy on the eyes.   If the report is true, I wish them both much happiness.  Here are snippets from E! News:

Sources exclusively tell E! News that Daley has been dating Dustin Lance Black, the 39-year-old writer who won an Academy Award for his screenplay for Milk, the 2008 biopic about gay rights activist legend Harvey Milk (Sean Penn also won an Oscar for playing Milk in the flick).

Back in October, Daley and Black were spotted together for the first time, grabbing a snack at The Coffee Bean in Hollywood.