ACLU Sues Catholic Bishops Over Policies on Abortion at Hospitals 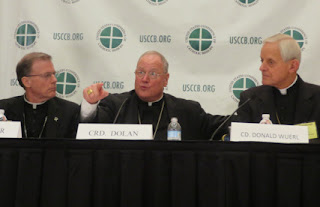 The U.S. Roman Catholic bishops enjoy trampling on the rights of others as they hide behind the false cloak of "religious freedom" to disguise their quest to impose their beliefs on all citizens.  Thus, it is rather sweet to see the hypocrisy filed bishops on the receiving end of a lawsuit challenging the bishops' efforts to thwart abortion and contraception services at Catholic hospitals that receive federal funding.  Leading the charge against the bishops' disingenuous claims of religious freedom is the ACLU.  The New York Times looks at the lawsuit filed against the bitter old men in dresses.  Here are article excerpts:

The American Civil Liberties Union announced on Monday that it had filed a lawsuit against the nation’s Roman Catholic bishops, arguing that their anti-abortion directives to Catholic hospitals hamper proper care of pregnant women in medical distress, leading to medical negligence.


The suit was filed in federal court in Michigan on Friday on behalf of a woman who says she did not receive accurate information or care at a Catholic hospital there, exposing her to dangerous infections after her water broke at 18 weeks of pregnancy.

In an unusual step, she is not suing the hospital, Mercy Health Partners in Muskegon, but rather the United States Conference of Catholic Bishops. Its ethical and religious directives, the suit alleges, require Catholic hospitals to avoid abortion or referrals, “even when doing so places a woman’s health or life at risk.”

The suit opens a new front in the clash over religious rights and medical care. The Catholic Church has fought against requiring all health plans to include coverage of contraception and is likely to call the new lawsuit an attack on its core religious principles.


Catholic hospitals account for about one in six of the country’s hospital beds and in many regions their influence is spreading as they forge alliances with non-Catholic medical groups.


Tamesha Means, the plaintiff in the lawsuit, said that when she was 18 weeks pregnant her water broke and she rushed to Mercy Health, the only hospital in her county.

Her fetus had virtually no chance of surviving, according to medical experts who reviewed the case, and in these circumstances doctors usually induce labor or surgically remove the fetus to reduce the mother’s chances of infection.

But the doctors at Mercy Health, Ms. Means said, did not tell her that the fetus could n t survive or that continuing her pregnancy was risky and did not admit her for observation. She returned the next morning, bleeding and in pain, and was sent home again. That night she went a third time, feverish and writhing with pain; she miscarried at the hospital and the fetus died soon after.

At the news conference Monday, Dr. Douglas W. Laube, an obstetrician at the University of Wisconsin Medical School, described the care Ms. Means received as “basic neglect.” He added, “It could have turned into a disaster, with both baby and mother dying.”

In 2010, the diocese of Phoenix stripped a hospital of its affiliation after doctors there said they performed an abortion to save a mother’s life.


The bishops continue their fetus worship while not giving a damn about the lives of mothers.  It's but further proof that women are treated as inferior and disposable by the bitter old queens in dresses.
Posted by Michael-in-Norfolk at Monday, December 02, 2013