Was Rome Felled by Gays or Christianity? 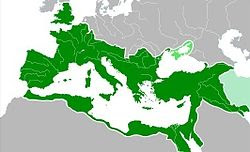 When you consider what Christians say about LGBT people today one of the funnier things you tend to run across when you start reading history is the Pagan argument against Christianity. Which ran along the lines of Christianity was bad because it made men effeminate by making them more concerned with the afterlife rather than battle. Or to quote Machiavelli on the subject: "Our Religion has glorified more humble and contemplative men rather than men of action. It also places the highest good in humility, lowliness, and contempt of human things: the other places it in the greatness of soul, the strength of body, and all the other things which make men very brave. And, if our Religion requires that there be strength (of soul) in you, it desires that you be more adept at suffering than in achieving great deeds.

This mode of living appears to me, therefore, to have rendered the world weak and a prey to wicked men, who can manage it securely, seeing that the great body of men, in order to go to Paradise, think more of enduring their beatings than in avenging them. And although it appears that the World has become effeminate and Heaven disarmed, yet this arises without doubt more from the baseness of men who have interpreted our Religion in accordance with Indolence and not in accordance with Virtu."