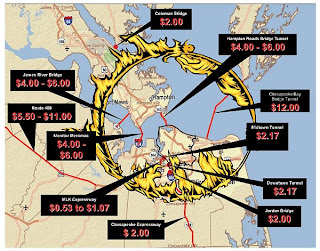 The GOP in Virginia will go to any lengths to avoid raising taxes and seems to always want to pursue "public/private partnerships" that will bring financial windfalls to the private players and increased costs to the rest of the public. The latest example of this insanity is proposals to address the ever worsening traffic bottlenecks at the bridges and tunnels that connect the south side of Hampton Roads to the Virginia peninsula and the rest of the state via Interstate 64. In addition to adding killing tolls, the plans continue to overlook the main cause of tunnel and bridge congestion: moronic drivers who refuse to maintain the posted speed limit - in the HRBT tunnel which I use daily, many slow down some 20-30 mph - and/or refuse to get out of the left lane even though traveling at under the speed limit. VDOT and the State Police do NOTHING to address these major causes of the problem. The Virginian Pilot has a story that looks at the GOP backed idiocy which would cause me to have to relocate my office out of Norfolk. Here are highlights:
*
A map of Hampton Roads that depicts a ring of fire engulfing the region has made its rounds at city halls and in the community. The ring is connected by a series of new toll roads, bridges and tunnels that have been proposed to improve movement in and out of the area,
*
The dynamics of all that are worrisome," Norfolk Mayor Paul Fraim said. "What does it mean for our economy? Has anybody thought through all this?"
*
All the toll roads would be operated by private companies. The proposed rates: - $4-$6 on an expanded Hampton Roads Bridge-Tunnel as well as on the Monitor-Merrimac Memorial Bridge-Tunnel and the James River Bridge;- $2.17 on an expanded Midtown Tunnel as well as on the Downtown Tunnel;
*
"My greatest concern is that it would appear that tolls of these levels would defeat our purpose for these projects - a lot of people won't be making these trips," said Dwight Farmer, executive director of the Hampton Roads Transportation Planning Organization.
*
Virginia Transportation Secretary Sean Connaughton said Gov. Bob McDonnell will be rolling out transportation funding strategies over the next few weeks that will have "direct positive impact for projects contemplated for Hampton Roads." The state highway budget has dipped 22 percent since 2008, mostly because of dwindling gas tax revenues.
*
James Koch, an economist and former president of Old Dominion University. "There are costs attached to doing nothing." Koch said "reasonably modest" tolls, similar to what is proposed at the Midtown Tunnel, would likely be beneficial because of the gains in mobility from the road improvement. Tolls as high as the ones proposed for the Hampton Roads Bridge-Tunnel, however, "would probably choke off commerce," he said, adding that adjustments would be made in the long term, such as moving closer to work and using transit or carpools.
*
For far too long, under the anti-tax mantra of the GOP, the Commonwealth of Virginia has done far too little to address highway needs *the GOP has held the Virginia House of Delegates for a over decade). Using these "public/private give aways will not solve the problem for most residents and will make the area even more isolated.
Posted by Michael-in-Norfolk at Wednesday, December 08, 2010