The Bible and Homosexuality 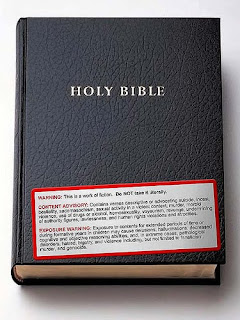 The Christianists and other opponents of full civil legal equality for LGBT Americans - as LGBT individuals across the globe - love to cite the Bible as the justification for their efforts to denigrate us and keep us second or third class citizens. Indeed, they disingenuously claim that they have no choice but to follow the Bible's dictates. Never mind that they selective pick and choose which Bible passages to apply literally and which to ignore, especially if the passages are inconvenient in their own lives: bans on lying and bearing false witness; bans on divorce; bans on greed and a love of money. The passages that are ignored seems at times endless. The Rt. Rev. V. Gene Robinson, Episcopal Bishop of New Hampshire, has a column in the Washington Post that looks at the issue of homosexuality and the Bible. Needless to say, his reading is not in keeping with that of the professional Christian/hater set. Here are some column highlights:
*
First, and most famous, of the scriptural texts used to condemn homosexuality are the two references in the Holiness Codes of Leviticus: "You shall not lie with a male as with a woman; it is an abomination." (Lev. 18:22) and "If a man lies with a male as with a woman, both of them have committed an abomination; they shall be put to death; their blood is upon them." (Lev. 20:13)
*
The context of these two passages are the holiness and purity codes set down for the people of Israel - rules set forth both to define what was clean and unclean before God, as well as what set the Hebrew people apart from their heathen neighbors who worshiped gods other than the one true God
*
Now the assumption here is that to be a man is to desire women. Anything else is acting against one's nature. Thus when a man lies with another man he is acting contrary to his own nature. It was inconceivable in this context that a man could be genetically or biologically predisposed to desire other men. To be engaged in homosexual activity therefore was to do what one was literally not inclined or predisposed to do. Thus it was acting against one's own conscience and predispositions. This is what made it unnatural and therefore a violation of nature."
*
This is an important point, difficult for the modern day mind to grasp: homosexuality as a sexual orientation was unknown to the ancient mind. Same gender, intimate physical contact was not unknown, of course, but everyone was presumed to be heterosexual.
*
[T]he biblical writers in each instance were speaking of homosexual acts undertaken by person whom the authors presumed to be heterosexually constituted." Therefore, any man who lay with another man as with a woman was considered to be a heterosexual man acting against his true nature.
*
The psychological construct of a homosexual orientation was not posited until the late 18th century . . . Such a possibility was unknown to the ancient mind. And so, these verses from the Leviticus Holiness Code must be read in the context of the assumption that everyone was heterosexual by nature, and acting contrary to that was not "normal," and outside the will of the Creator.
*
We cannot, then, isolate these passages about homosexual acts and impute to them the kind of enduring authority which we ascribe to nothing before or after these passages.
*
One other guiding principle in these codes which I presume most modern day Christians and Jews would not espouse is the bias against women. Women are generally regarded as problematic, less worthy, and more unclean than men. A man who had a discharge of semen was ritually unclean until sunset, but a woman who menstruates was unclean for a week. When a woman gave birth to a boy, she was unclean for a week - but when she gave birth to a girl, she was unclean for twice as long!
*
Finally, there is the context of the "science" of conception of that time. Male sperm was thought to contain all things necessary for procreation. Women contributed nothing but a place for the nascent life to incubate. Therefore, the "spilling of seed" (male sperm) on the ground was a kind of abortion, the killing of life. . . . Oddly enough, we have relaxed these "rules" against a man "spilling his seed" through masturbation and birth control, yet we hold onto "a man shall not lie with another man as with a woman" as if it were eternally binding on believers. Such an inconsistency simply does not make sense.
*
Given these changes in our modern understandings and contexts, it is no longer appropriate for us to condemn men who have intimate sexual relationships with other men based on this proscription in the Leviticus Holiness Code. Either all of these proscriptions must be tossed out as binding on us, or they all must be adhered to. Biblical "literalists" cannot have it both ways, picking and choosing which proscriptions are still appropriate.
Posted by Michael-in-Norfolk at Wednesday, December 08, 2010