Reality Check to the Myth of American Exceptionalism 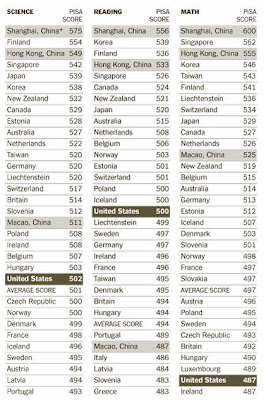 For the record, I am not anti-American by any means. I believe that the USA is a remarkable nation in many ways. But at the same time, I believe in objective reality and that often the best patriots are those who questions what the nation and its leaders are doing in the name of all citizens. That said, late last month I wrote about the the myth of American exceptionalism which is so popular with the Christianists, the Tea Party and Sarah Palin's followers. As noted in that post, it's a myth, it's a dangerous myth, and it blinds people from facing reality. The just released results of a test called Program for International Student Assessment, known as PISA, display unsettling results. The test is given to 15-year-old students by the Organization for Economic Cooperation and Development, a Paris-based group that includes the world’s major industrial powers, and the results show just how unexceptional the USA is in terms of knowledge. The New York Times has further details.
*
The chart set out above and the USA's declining placement on educational achievement ought to be a shocking wake up call. It also indicates that rather than pushing for prayer in schools, the denigration of LGBT Americans, religious displays on public property, and teaching creationism as a science, anyone truly concerned about the nation's future - including self-anointed uber-patriotic members of the GOP base - ought to be lobbying non-stop for better schools and better curriculum. Will it happen? Not hardly because an intelligent population translates to fewer churchgoers and Kool-Aid drinking GOP members.
*
HT to Bob Felton.
Posted by Michael-in-Norfolk at Tuesday, December 07, 2010