Clarence Thomas Needs to Disqualify Himself From Myriad Cases 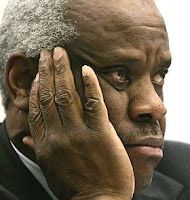 As note in the prior post, the proponents of Proposition 8 attempted to disqualify Ninth Circuit judge Stephen Reinhardt from the panel because he is married to a former director of the American Civil Liberties Union's Southern California office. Reinhardt rejected the request. The conservatives need to be carefully what they ask for because if the standard they sought to apply against Reinhardt is applied to Supreme Court Justice Clarence Thomas, Thomas would have to be disqualified for a large number of cases give the far right activities of his wife, Virginia Thomas who is raking in money from far right organizations and donors. A column in Bloomberg.com looks at the double standard that the Prop. 8 supporters are making. Here are highlights:
*
Conservative forces tried and failed to persuade Stephen Reinhardt, one of the most liberal judges on the federal bench, to remove himself from a California gay marriage case, scheduled for argument Monday before a three judge panel, including him.
*
The problem is Reinhardt’s wife, Ramona Ripston, the anti- gay-marriage crowd says in a court paper filed this week. Ripston has labored for years as executive director of the American Civil Liberties Union of Southern California. Her group has no direct role in the lawsuit Reinhardt is set to consider. It is neither plaintiff nor defendant nor legal counsel.
*
Liberal judges aren’t the only ones whose wives hold visible and powerful posts. Consider Virginia Thomas, a longtime conservative activist whose husband, Clarence, occupies a seat on the Supreme Court. She publicly embraces the Tea Party, has worked for various conservative groups, and founded Liberty Central Inc., an information clearinghouse for conservative activism.
*
[D]oes her activism mean her husband should recuse himself from those cases where she or her group has taken a stand? A memo posted on the Liberty Central Web site that included her name (mistakenly, the group said), called the health-care reform law “unconstitutional.”
*
Ethical Question. does her activism mean her husband should recuse himself from those cases where she or her group has taken a stand?
*
[I]f Liberty Central’s major funders had a matter before the court, then Thomas should step down. For that reason, the group should disclose its backers, even though the law doesn’t require it to do so.
*
The over-arching principle as to when federal judges should recuse themselves is whether the mere appearance of bias is reasonable. That’s according to the federal judiciary’s Code of Conduct and Supreme Court precedent.
*
As I have noted before, in my opinion, Virginia Thomas needs to get out of conservative politics - and stop bringing tens of thousands of dollars into her family's income, or her husband needs to resign from the Supreme Court. Neither she nor her husband should be allowed to have it both ways.
Posted by Michael-in-Norfolk at Monday, December 06, 2010