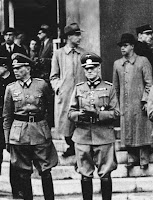 I am not anti-American by any means, but it disturbs me greatly when xenophobes Sarah Palin and many in the Kool-Aid drinking Tea Party ranks depict the United States as some type of God-favored nation while glossing over the sordid and often morally deficient aspects of the nation's past. A new report, “Hitler’s Shadow: Nazi War Criminals, U.S. Intelligence and the Cold War,” is anything but complimentary or supportive of America's alleged exceptionalism. Indeed, the report based on materials declassified in the National Archives shows that all too often barbarous murderers were allowed to escape justice or were brought to America if they were deemed to have useful knowledge and/or skills. To me, the only way to avoid repeating dishonorable deeds is to admit that the nation is not perfect and in no wise chosen by God as something special. Such an honest look at our history may not be good for jingoists, but if true morality is supposed to matter, the ugly truth needs to be recognized and never repeated. Here are highlights from the New York Times on the new report:
*
After World War II, American counterintelligence recruited former Gestapo officers, SS veterans and Nazi collaborators to an even greater extent than had been previously disclosed and helped many of them avoid prosecution or looked the other way when they escaped, according to thousands of newly declassified documents.
*
“When the Klaus Barbie story broke, about his escaping with American help to Bolivia, we thought there weren’t any more stories like that, that Barbie was an exception,” said Norman J. W. Goda, a University of Florida professor and co-author of the report with Professor Richard Breitman of American University. “What we found in the record is that there were a fair number, and that it seems more systematic.”
*
“Hitler’s Shadow” adds a further dimension to a separate Justice Department history of American Nazi-hunting operations, which the government has refused to release since 2006 and which concluded that American intelligence officials created a “safe haven” in the United States for certain other former Nazis.
*
Like earlier reports generated by the group, this one paints a grim portrait of bureaucracy, turf wars and communication gaps among intelligence agencies. It also details blatantly cynical self-interested tactical decisions by Allied governments and a general predisposition that some war crimes by former Nazis and their collaborators should be overlooked because the suspects could be transformed into valuable assets.
*
Among them was Rudolf Mildner, who was “responsible for the execution of hundreds, if not thousands, of suspected Polish resisters” and as a German police commander was in Denmark when Hitler ordered the country’s 8,000 Jews deported to Auschwitz.
*
The report cites other cases that parallel the experience of Klaus Barbie, known as the Butcher of Lyon. He cooperated with American intelligence agents who helped him flee to Argentina. One of those cases involved Anton Mahler, who as a Gestapo anti-communist agent interrogated Hans Scholl, the German underground student leader who was beheaded in 1943. Mr. Mahler also served in Einsatzgruppe B in occupied Belarus, which was blamed for the execution of more than 45,000 people, mostly Jews.
*
In 1952, the report says, the C.I.A. moved to protect Mykola Lebed, a Ukrainian nationalist leader, from a criminal investigation by the Immigration and Naturalization Service. He would work for American intelligence in Europe and the United States through the 1980s, despite being implicated in guerrilla units during the war that killed Jews and Poles and being described by an Army counterintelligence report as a “well-known sadist and collaborator of the Germans.”
*
It is not a pretty picture, but Americans need to open their eyes to the truth rather than patting themselves on the back and convincing themselves that they and the USA are special or even favored by God.
Posted by Michael-in-Norfolk at Saturday, December 11, 2010