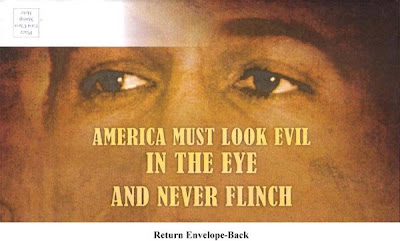 I have often felt of late that the Republican Party of Virginia is even more reactionary, bigoted and down right nasty than the Party at the national level - even though the Virginia GOP claims to be the party of "family values" and "decency." While the GOP as a whole has sunk to despicable lows in this election cycle, the Virginia GOP has risen to the challenge to prove it is utterly sleazy and racist. The Talking Points Memo has a story that is almost too much to believe in terms of the racial overtones and bigotry now on display by the Republican Part of Virginia. The image above is from a a new mailer from the Republican Party of Virginia. Its hard to believe that any legitimate political party would put out such vile trash, but sadly it is indicative of how the Christianists and lunatic base has remade the Party into something evil. Here are some story highlights (other images from the vile mailer can be seen at TPM):
*
In the race's final stretch, much of the real sludge and slime that floats to the surface will be the work not of the campaigns but of under-the-radar operations run by state parties and the like. Here, for instance, is a new mailer from the Republican Party of Virginia that has to be seen to be believed. It hits Dems -- and by extension, Obama -- for wanting to appease terrorists and rogue leaders.
*
But the key is the last page, which displays a man who looks like Obama but with the same dark and sinister aspect as the bad actors depicted elsewhere in the mailing. . . . . We asked Virginia spokesperson Gerry Scimeca whether the likeness to Obama was in fact the Illinois Senator, and he said he couldn't immediately say. Asked to defend the mailer, he said: "It's about the fact that the world is evil," he said, referring to the multiple bad actors that populate the planet. "Choosing a president is about standing up to them."
*
As Raising Kaine properly notes:
*
All Virginians should utterly reject this entire approach to politics, as well as this specific mailer. And we're all still waiting for Bob McDonnell, Jim Gilmore, Bill Bolling, John Warner, etc. to denounce Jeff Frederick and demand his resignation as RPV chair. If not, we can only conclude that they agree with his approach, then vote accordingly.
*
I suspect John Warner may condemn this action, but my bet is that Bob "Taliban Bob" McDonnell, Jim Gilmore and Bill Bolling will not. In fact, it looks like the type of bigotry McDonnell would support based on some of his past low life actions (e.g., the lynch mob atmosphere he helped create in forcing Verbena Askew from the Circuit Court bench because - my heavens - she was rumored to be a lesbian).
Posted by Michael-in-Norfolk at Thursday, October 16, 2008