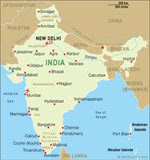 Would that more courts in the USA would demand that proponents of anti-gay laws have to support their arguments with more than just religious beliefs and texts. That's what the Delhi High Court said on Wednesday to government officials who were trying to rely on religious texts to justify the penal code ban on gay sex. The Court told the government proponents to come up with scientific reports to justify the proposed continuance of the anti-gay ban. If the proponents of Proposition 8 had to deliver such evidence in support of their anti-gay efforts, the Proposition would be dead. Here are some highlights from the Times of India:
*
Chief Justice A P Shah and Justice S Muralidhar [chastised the government] for relying on religious texts to justify the prohibition on consensual sex between adults of same sex. "We won't be first country to decriminalise in case we do. Show us AIDS has spread where homosexuality has been decriminalised. Place some authentic study like one backed by UN," HC said.
*
The court's remarks came when the additional solicitor general P P Malhotra cited an article condemning gay sex which was religious in nature and in which racial profiling had been done to arrive at conclusions. "We should not accept religious literature instead of scientific report. In a secular country how can a government rely on a report which says that certain races contribute more to homosexuality?," the bench remarked, adding, "These are not scientific reports. This is a propaganda. Your arguments should be based on scientific reports. Show us scientific reports which justify criminalisation of such acts."
*
The National Aids Control Organisation, in its affidavit filed on behalf of Union health ministry, had said that gay sex among consenting adults should be decriminalised. The court observed that if the government goes by the religious text referred by it then all such people (homosexuals) in the country would be put behind the bars.
*
Referring to Naco report, the court said that right to health is a fundamental right which cannot be denied to any one and the government has to justify criminalisation of gay sex which may pose health hazards to such people. "There is no doubt that they are high risk group, so you have to prove that allowing gay sex among consenting adults would increase the risk of HIV to an extent to criminalise it," the court said.
Posted by Michael-in-Norfolk at Wednesday, October 15, 2008