Thinking Conservatives: MIAs of the GOP 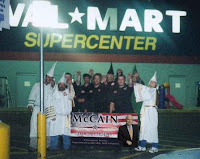 It's nice to see others recognize what I realized quite some time ago when I resigned from the Republican Party after 8 years as a City Committee member, precinct captain, appointee to a state board, and active worker on the campaigns of numerous GOP candidates. The tide against reason and logic began long before John McCain picked Bible Spice Palin as his VP candidate, but Palin's selection more or less formalized the GOP's abandonment of thoughtful analysis and reason in exchange for the delusional alternate universe of the Christian Right. Living in an area that is home to CBN and Regent University, one all too often comes into contact with the Christianist zombies/robots who either cannot or will not let go of their indoctrination by disingenuous folks like Pat Robertson, Jerry Falwell and James Dobson (all of whom are usually laughing all the way to the bank). In today's Los Angeles Times, Rosa Brooks has a op-ed column that does a great job at looking at the flight of thinking conservatives from the GOP. Here are some highlights (emphasis in caps is mine):
*
Maybe most fun of all, we're getting to watch a steady procession of rats leaving the sinking GOP ship. One by one, the nation's more reputable conservatives have been edging away from the Republican presidential ticket. It started with John McCain's choice of Sarah Palin as his running mate. Thinking conservatives -- as of a couple of months ago, there were still a few left -- were distinctly underwhelmed. In the New York Times, David Brooks chastised McCain for "throw[ing] away standards of experience and prudence" by picking Palin. In the Washington Post, Charles Krauthammer said Palin was "not ready" for prime time. David Frum, a former Bush speechwriter and fellow at the American Enterprise Institute, complained that Palin had "thoroughly -- and probably irretrievably -- proven that she is not up to the job." In the National Review, conservative columnist Kathleen Parker said Palin was "clearly out of her league" and urged her to "bow out."
*
In the Washington Post, George Will slammed McCain for his "fact-free slander," "substitution of vehemence for coherence" and "boiling moralism." On MSNBC, former Reagan speechwriter and Wall Street Journal columnist Peggy Noonan admitted that she's not sure who she'll be voting for this November: "Ahh. Umm. I'm thinking it through."
*
Then -- more fun -- some conservatives began to actually endorse Barack Obama. Wick Allison, a former publisher of the National Review, wrote that today's brand of conservatism "has produced financial mismanagement, the waste of human lives, the loss of moral authority, and the wreckage of our economy that McCain now threatens to make worse. ... Obama is almost the ideal candidate for this moment in American history."
*
Christopher Hitchens, who has spent the last five years deriding the Democratic position on Iraq as that of "the surrender faction," endorsed Obama too, concluding "the Republican Party has invited not just defeat but discredit this year, and ... both its nominees for the highest offices in the land should be decisively repudiated."
*
Whee! Incredibly, the fun continued. Christopher Buckley, National Review columnist and son of conservative icon William F. Buckley, also endorsed Obama: "Obama has in him ... the potential to be a good, perhaps even great leader. ... And so, for the first time ... I'll be pulling the Democratic lever in November."
*
[I]t's painful to watch. Once, the GOP proudly claimed to be the "party of ideas." They weren't generally good ideas, it's true -- but they were ideas eloquently defended by men and women who believed it was their duty to study history, philosophy, science, economics and international relations and to do the intellectual heavy lifting needed to try to persuade smart people with different views to come around to their way of thinking. That was the GOP nurtured by conservative intellectuals such as William Buckley. Buckley was many things liberals didn't admire, but he wasn't IGNORANT, SAVAGE OR STUPID BY CHOICE.
*
But today, as the last few sober grown-ups leave the party, the visible face of the GOP increasingly looks like that of the people who shout "kill him!" when Obama's name comes up, who speak of black men they don't like as "uppity" or as "boys," who think you can't trust a Muslim or an Arab, who think talking about "Barack Hussein Osama" is witty and (I'm talking to you, Sarah Palin and John McCain) who claim Obama "pals around with terrorists."
Posted by Michael-in-Norfolk at Thursday, October 16, 2008

From Reagan until today the Republican Party has done itself in by sticking to "ideology" in the face of logic and reality. The Iraq War is only the latest example of ideology trumping fact-based reality. I certainly remember Gingrinch's "Contract "ON" America" another right wing screed that had nothing to do with the real lives people live every day.

Once again, however, we can take nothing for granted. The growing "mess" with voter registration and supression will continue unless Obama wins big. This must be our goal.

Thanks for your blog! I am a former republican myself. I voted republican most often. even was an election official in my city. Now I am out and working to be true to myself and my GLBT bretheren; I can no longer vote or support the republican party. My only regret is not coming to this place sooner! For me it was scholarly, Holy Spirit led study of the Scripture, and the research available that helped. well that and thinking logically as well as theologically. I hope and pray Obama wins and there is a majority of Dems elected to congress.
Thanks again
Frank

Well... sometimes the reason why Republicans leave the part is because the party left them first.